Straight Browsing from the Library: Burn on the Western Slope by Angela Smith 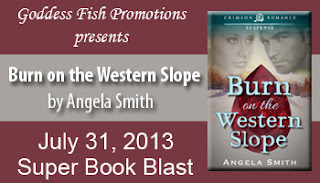 Browse Burn on the Western Slope with us today as part of the author's Super Book Blast through Goddess Fish Promotions. Angela will be awarding one of three prizes: a car mirror hanger or key chain (a seashell as a tie-in to her book), an mp3 album by Pretty Little Blisters, a $10 Amazon gift card, to three randomly drawn commenters during the tour. You can see the other stops at http://goddessfishpromotions.blogspot.com/2013/06/virtual-super-book-blast-burn-on.html.

On the ski slopes of Montana, deception turns deadly and seduction becomes more hypnotic than jewels.

Reagan McKinney is on a mission to discover more about a deceased uncle who mysteriously left her a sizable inheritance, a condo in the mountains, and a stash of stolen jewels. With both her graphic design career and her love life in shambles, the opportunity to begin a new life couldn’t have come at a better time. When she becomes involved with the sexy FBI agent next door, she finds her struggle is not only to keep her heart intact, but her life.

Grief stricken after an undercover investigation ends in the tragic death of his partner, FBI Agent Garret Chambers goes home to find solace in the arms of his mountain home. That is, until his boss assigns him to investigate the spirited brunette staying in the condo next door. He is assigned to investigate Reagan’s involvement with a large jewel fencing organization, but his investigation becomes comprised when his attraction to her heats up. Will his discovery destroy everything he has come to love, including Reagan?

Garret blinked, slowly, and she watched his chest rise and fall. “Did you know something about Kyle?”

She threw her boot at him. He caught it. She cursed.

“I knew he was a dirty cheating slime ball. Just like you.” Reagan tugged on her socks and her knee-high boot, tightening the lace in record speed. Standing, she marched to him and seized the other from his grasp, refusing to look at him. Her balance teetered as she tried to slip it on, but she wouldn't give him the satisfaction of seeing her helplessness. She braced one hand on the wall as she loosened the lace and lugged on the boot, refusing to sit. Refusing to reveal any kind of vulnerability or regret.

Garret remained in the doorway, watching. Unmoving. She pushed past him, his woodsy scent all the more reason to hate him, or at least hate the effect he had on her. She donned her jacket, slipped on her gloves, and tore out the front door.

“It’s too far to walk,” Garret called behind her.

Garret pulled on her arm and whipped her around. Eye level with his chest, she didn’t fail to notice the tension streaming out of every pore of his body. The cords in his neck bulged with each breath. His eyes, a deep, dark, abysmal dye, wouldn’t let her inside his head. Which was a good thing, now that she knew the psychosis of his mental state. 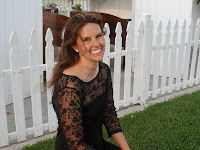 During my senior year in high school, I was dubbed most likely to write a novel because I always had my nose stuck in a book. I would hide my romance novels under my history book until my teacher called me out on it. Writing has been my dream ever since my mother read Brer Rabbit to my sister and me so often that we were able to recite it back to each other before actually learning to read. I love reading about the adventure of love, and getting involved in the legal field developed my love of suspense. I believe love is a mystery that most people have trouble resolving. While I don’t expect we’ll ever solve that mystery, I love to read and write about characters who work to solve their love’s mystery. See more about me at my website www.loveisamystery.com or tweet me @angelaswriter.