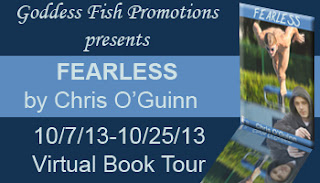 Chris O'Guinn has stopped by The Library to chat about books on his virtual book tour with Goddess Fish Promotions. Chris will be awarding a $100 Amazon gift card to a randomly drawn commenter during the tour, so visit his other stops for more chances to win. You can find them here: http://goddessfishpromotions.blogspot.com/2013/09/virtual-book-tour-fearless-by-chris.html.

Tell us about your current book in 10 words. The myriad shades of love. The transformative power of friendship.

E-Reader or print? and why? I love e-readers. Books wear out, no matter how well you treat them—and I don’t treat mine very well. Also, books weigh a ton, so it’s a lot easier to transport them if they’re electronic.

Least favorite book you've read this year? Oh dear. I don’t like to insult the work of other authors. It’s my belief that even if I hate a book, someone out there loves it and they don’t need to hear me making unflattering comments about it. So, putting this as carefully as possible, I feel The Summer of 1983 by Bill Gray did not live up to its potential. There were parts of it I loved and I wish those had flourished more instead of the parts I didn’t like.

Favorite book you've read this year? Hands down, Super Hero by Eli Easton. It was a wonderfully funny and real true love story.

Favorite place to read? I have a whirpool bath. I can stay in there for hours.

Do you loan your books? I do. As an author, I am keenly aware that a loaned book is money out of a writer’s pocket, but I think of it as an investment. If the person I loan a book to likes it, they will be likely to buy future books by that author. And I hope the same holds true with people who borrow my books.

Favorite book to recommend? Of course, this always depends on the person. I have fairly diverse tastes and so I tailor my recommendations. However, one book (other than Super Hero) that I have pushed on people shamelessly is a free e-book called The Student Prince by FayJay. Though it is a fanfiction based on the Merlin TV show, it is mostly original. In fact, it’s easy to look at it as a modern day Arthur tale—just with gayness.

Re-reader or not? Definitely a re-reader. I mean, there are a handful of books I love enough to read multiple times, but those rare few (like the Percy Jackson series) are like warm, comfy blankets in front of a fire on a snowy night.

What would make you not finish a book? A book has to either bore me or offend me beyond reason. I have a few things that really put up my hackles. One is a lack of agency in a character—that is, a character who is just a spectator in their own life and not a participant. I’d give examples, but again, I don’t like to besmirch other authors.

Keep books or give them away? I have very few paper books anymore. I packed up most of them, more than half of which belonged to my late wife, and donated them to the library. I know she would love to know her beloved books were making people of all ages happy. 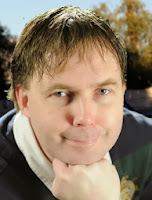 I’ve been writing since I was fifteen, not that those stories will ever be allowed out of the dark hole I buried them in. I focused primarily on the Fantasy genre for the first two decades, occasionally diverting into modern fiction. In 2010, I embarked in a self-publishing career, focusing on the young adult novel genre. When I’m not writing, I am contributing to TheBacklot.com, a gay entertainment website.

You can follow me on Facebook and you can keep up to date with my works via Lightbane.com.

At fifteen, Justin is already a cynic. He’s experienced too many betrayals, too many disappointments. He doesn’t want to be involved in anything. He doesn’t want to be popular. He doesn’t even want friends anymore, since they only ever let you down. He just wants to get through high school and the best way he can come up with to accomplish that goal is to simply be invisible.

His self-imposed exile from high school life is threatened when Liam, the scary stoner, reaches out to him. What starts out as a strange and unsettling encounter with the unnerving, pot-smoking teenager evolves into the sort of friendship that changes the course of a person’s life.

But as Liam drags the reluctant Justin out of his shell, Liam’s own secret is revealed.

Fearless is the story of the myriad shades of love, how to find one’s courage and the transformative power of friendship.