Straight Browsing from the Library: Sinners and Saints by Kristina Garlick

This post is part of a virtual book tour organized by Goddess Fish Promotions. Kristina will be awarding a $15 azon or B/N GC to a randomly drawn winner via rafflecopter during the tour. Click on the tour banner to see the other stops on the tour.

My name is Zoey Major and I live in Fort Star, New Jersey. I am also a survivor in the zombie apocalypse. Seems very cut and dry but I have been hiding something- like really huge. My secret is game changing. I am not like the others... I know, what a surprise twist! Unfortunately, I can’t tell you why I am different. If you really want to know, you have to figure it out. Hey, even in these dark times, a girl needs her secrets.

United we... united we... we were supposed to stand together as a society but it did not work out like that. The United States and much of the world, actually went to sh*t for a little bit when the zombies came. Perhaps the only saving grace was the fact that man learns to adapt. We always do. A prime example would be the invention of the wheel, the television or even a toaster pastry because why the f*ck not eat something bad for you?

For you see, if man has a want or desire, it may take years, but he'll invent it. One thing I am still waiting on is that damn time machine. I am looking at you, Doc Brown. Ha! However, not all inventions should ever leave the paper. Sometimes an idea is just an idea as biological weapons rarely ever make anything better. Yeah, perhaps not every weapon should be tested or even used, as the results can't always be contained. United we... united we... we were supposed to stand together.

Catey: "So is it cool that I sign you up for speed dating?"

Zoey: "There should be no speed dating in the zombie apocalypse."

Catey: "And this is why you are single. You are so negative."

Zoey: "Huh, I didn't know that was the reason. I just thought it was because every eligible bachelor who isn't a toad has been either taken or eaten but hey, maybe I am wrong."

Catey: "I think it's because you put up a wall." 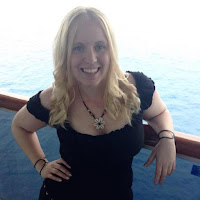 Kristina Garlick lives in Warren County, New Jersey. She holds a Masters in Parks & Resource Management from Slippery Rock University. While she loves the outdoors and has many hobbies such as soap making, writing has always been her passion. Kristina wrote her first full length fantasy story at ten and had her first book published when she was fourteen. She has a unique style of writing, which she calls Diary-Play format. Kristina is also available for book signings, panels, discussion groups and other special functions.