Straight Browsing from the Library: A Perfect Trade by Anna Sugden 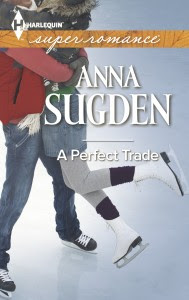 Truman "Tru" Jelinek's life is pretty much off the rails. With his professional hockey career on thin ice, and his personal life falling apart, he's ready to implement some serious changes. Helping Jenny Martin—the only girl he's ever loved—make her dreams a reality is a good place to start.

There's just one problem: Jenny doesn't want his help. She barely wants to speak to him. But Tru is prepared to negotiate a deal that even Jenny can't refuse. As trading favors turns into sharing passion, he has to face the truth that when it comes to Jenny, the game is far from over.

To read the entire first chapter, please visit http://goddessfishpromotions.blogspot.com/2014/06/book-blast-perfect-trade-by-anna-sugden.html and visit each blog in order.

“There’s too much emotion between you, for former high school sweethearts.”

If only she knew. He’d never told anyone—not his best friend Jake, nor his brothers—the truth about what had happened with Jenny. “We weren’t exactly sweethearts.” Not quite a lie. Their relationship had barely started before he’d blown it to hell. “We were buddies, played hockey together. We grew apart.”

Melanie shook her head. “I doubt it’s that simple.”

“It is.” It had to be. He changed the subject away from Jenny to one that wasn’t any more comfortable; it too was littered with guilt and betrayal. “I’ve told you before, I’m cautious because I don’t want to make a mistake. Divorce is painful all round.”

“If you believe that’s the only reason you don’t want commitment, then you’re lying to yourself as well as me.” She rose. “I want you to take me home.”

He knew he should try to rescue their relationship, but he couldn’t find the energy. Where was his “fight till you hear the buzzer” mentality? Gone. Like his chances of winning the Stanley Cup this year. He knew which he felt worse about.

“Okay.” He motioned for the waiter to bring the check.

As he paid, Tru wondered what he could have done to make the evening end differently.

His depressing conclusion was nothing. He didn’t question too closely whether he couldn’t think of a solution to the issues they—he—had or he didn’t want to.

The drive to Melanie’s place was tense and silent. There was nothing left to say. After a stilted goodbye, Tru headed to his apartment.

He closed the door and relief filled him. He should be upset. His relationship with Mel had lasted longer than any other. If there was a chance of him having a happily-ever-after with anyone, he’d have thought it would’ve been with her. Yet, now that it was over, he knew this was the right outcome.

Maybe he wasn’t meant to be married. He thought enviously of Jake and his wife, Maggie. Of the obstacles they’d overcome to be together. Of their happiness. Their marriage would last, for sure.

Tru wanted to believe there was someone special out there for him. Unfortunately, it looked as though the odds of finding that person were as slim as him being voted the league’s most valuable player this year.

He pulled an ice pack from the freezer and pressed it to his shoulder, then slumped onto the sofa and flicked on the TV to catch the Kings’ game.

He should forget about relationships and stick to hockey.

It was simpler. You win or you lose, you move on to the next game. On the ice your only commitment was to the logo on the front of your sweater.

Sure he wanted more than his career, but not unless what he felt for the woman was absolutely right. In hockey and in love, second-best didn’t count. 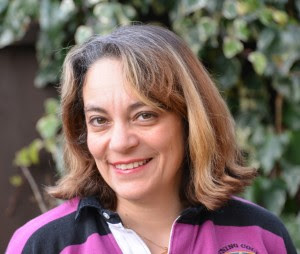 A former marketing executive and primary teacher, Anna lives in Cambridge, England, with her husband and two bossy black cats. Learn more about Anna, her heart-warming romances and her shoes at www.AnnaSugden.com. You can also follow her on Facebook, Twitter, Pinterest, and on the Romance Bandits blog.

Buy the book at Amazon, Barnes and Noble, iBooks, or The Book Depository.