Straight Browsing from the Library: All Bags Go to Cleveland by C.S. Hale

This post is part of a virtual book tour organized by Goddess Fish Promotions. A randomly drawn winner will receive a $50 Amazon/BN GC. Click on the tour banner to see the other stops on the tour.

If I’d never heard of me would I read my book?


Your favorite author was once someone you had never heard of. Back before I returned to school at 40 to get my teaching certificate, I loved to browse the “featured” section of my local library and read the back of the books, hoping to find something new. Wandering bookstores used to be a favorite pastime before they became so few and far between.

I’m now rural, living on an island, and juggling two full-time jobs - writer and teacher. My opportunity to read for fun is rare, but I can still stumble across the unexpected find. My monthly writers’ group does a raffle at the end of the meeting, raising funds to help pay for our speaker’s dinner. I am usually unlucky in other things, but for some reason I nearly always win the raffle if I buy a ticket, so I frequently don’t. I did purchase one at the November meeting and, sigh, won.

The books I received were chapter president Marie Tremayne’s RITA winner Lady in Waiting and Darynda Jones’s Second Grave on the Left. I finally had the opportunity to become bored shortly after Christmas and picked up Grave. I devoured it. How I had managed to miss this delightful series astounds me, but over the next two months I renewed my library card that had lapsed (due to the four years I spent completing my masters and then publishing two books). I even found her new series self-published on Amazon. Yay! More laughs to come.

So would I read my book? Most authors write what they want to read. In fact, I had initially intended to finish writing book #3 in my Bánalfar series, but faced with facing all of the trauma I had put Astrid through in books 1 and 2, I really needed an escape. Getting Cleveland out of the drawer and dusting it off provided that. Out loud laughs, a chance to virtually travel, and chocolate.

So if you like chocolate and a paranormal mash-up of My Big, Fat Greek Wedding and When Harry Met Sally sounds like your thing, give Cleveland a try. 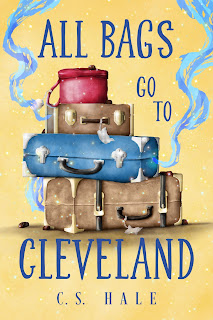 Angela Grimalke appears more blonde bombshell than the gremlin she is. But there is no denying her supernatural truth after her clumsiness gets her fired from her modeling career. Forced to work for her family’s upscale airline, she spends her days slinging luggage and wishing her parents would get off her back about finding a nice gremlin guy to settle down with.

Relationships were the last thing on her mind, not that her family would accept that.

For Dave Ford his frequent business travel made it next to impossible for him to find a woman who could tolerate his chaotic schedule. Which is why he appreciates Angela. Neither of them are looking for love, but Dave feeds Angela's addiction for chocolate while she provides him with the chaos to keep him on his toes.

However, as Angela’s parents bombard her with a parade of "eligible" gremlin men at their weekly family dinners, she finds herself torn between who she longs to be and her family’s expectations. Will she give in and live the life of magic they want for her? Or risk it all by to confessing to Dave that she isn’t human?

Angela glanced up from her computer screen. Dave Ford stood in front of her. The blood drained from her face. “Do I?” She raised her “helpful” smile.

“Yes.” Dave handed over his passport and put the Louis Vuitton garment bag on the scale. “Last time, you sent my bag to Cleveland.”

“You control the system. I think you owe me a glass of wine for having to find a tailor at six a.m. I had a nine o’clock business meeting and just my jeans and sweatshirt.”

“Hmm. By that reckoning, I think I’d owe the tailor for having to get you a functional suit so quickly at that early hour.”

Angela lifted her gaze. Dave—all six feet of him with his fabulous hair— had a hopeful expression on his face.

“I’m not in the habit of buying strange men alcohol.”

Dave stuck his hand out. “Hi. Dave Ford. Business traveler.” Angela laughed. “All I’m asking for is a glass of Malbec. Or maybe pinot noir. Small price to pay in comparison to my having to fight off jet lag via acupuncture.”

Dave shrugged. “It was early for the tailor. His aim wasn’t quite what it could have been.”

Angela dipped into Dave’s mind. The tailor had stabbed him a couple of times. And Dave was playing with her. He wanted to see what she’d do.

Catherine “C.S.” Hale has been writing fantasy since she could hold a pencil. When not holed up in a comfortable corner writing all her books out by longhand, she can be found somewhere by the sea, enjoying tea and pastries.

a Rafflecopter giveaway
Posted by Librarian Judith at 6:17 AM