Straight Reading From the Library: Gift of the Phoenix by Donna Cook 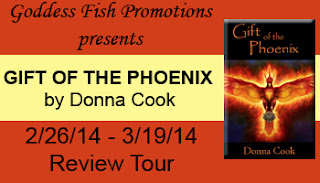 Goddess Fish Promotions provided The Library with a copy of GIFT OF THE PHOENIX by Donna Cook. Donna will be awarding a prize package consisting of a $30 Amazon GC, autographed paperback, and bookmark to a randomly drawn commenter during the tour. Click on the tour banner to see the other stops on the tour.

When three strangers are brought together by three mysterious stones and the discovery of a common enemy, they must fight to keep the magic of the Phoenix out of dangerous hands before their world is destroyed forever. But uniting will not be easy for Nicolai, the simple peasant with a powerful secret; Marcellus, the warrior prince who’s no longer heir to the throne; and Corren, a gifted wizard whose ambitions threaten to ruin them all. Full of magic, mystery, and a touch of romance, Gift of the Phoenix is an epic fantasy that takes the reader deep into the heart of a wondrous world and the three men destined to defend it.

This epic fantasy is, quite simply, awesome. Beginning hundreds of years before, at the rebirth of the Phoenix, a gift is left-- actually, more than one gift. And, these gifts will prove to be the salvation of the world--if the right group of people can be found to receive it.

Ms. Cook has done a great job at creating not only the world but each individual character is richly drawn. Each voice is clearly distinct from the other, and the secondary characters are just as well drawn as the primaries.

The action is non-stop and the levels of mystery and suspense just add to the enjoyment of the work. Ms. Cook was able to draw me into the action to the point where I forgot I was reading and just became one with the story--losing all track of time.

Thank you, Ms. Cook, for a wonderful wonderful time--and I'm so looking forward to the next book in the series. I have found a new auto-buy author!

Donna Cook is an Arizona native transplanted to Boise, Idaho, where she is delighting in the change of scenery. When she’s not writing she spends her time chasing the kids, exploring delicious eateries downtown, and dancing with her talented husband. Her epic fantasy adventure, Gift of the Phoenix has won several awards, including Semifinalist in the Kindle Book Review Book of the Year Awards, and Notable Read in the Shelf Unbound/Half Price Books Indie Book of the Year competition. She’s currently working on the sequel to Gift of the Phoenix.