Straight Browsing at the Library: Bittersweet Rescue by Coleen Kwan 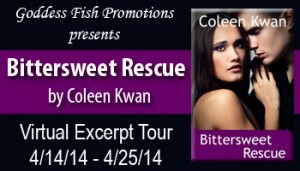 This post is part of a virtual book tour organized by Goddess Fish Promotions. Coleen will be awarding a $10 Amazon giftcard to a randomly drawn commenter during the tour. Click on the tour banner to see the other stops on the tour. 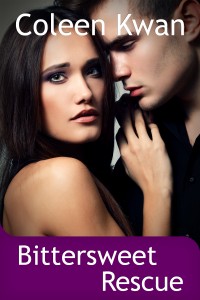 She rescued him, and saved herself.

When Ellie Sherwood rescues her boss from drowning, she never anticipates the consequences. For three years she’s existed in an emotional limbo after a catastrophic family tragedy, but now she’s awake and ready to seize life with both hands. And that includes the sexy boss she’s been secretly infatuated with for some time.

Drake Crawford is about to achieve his lifelong goal when a car accident plays havoc with his life. Not only is his plan for revenge delayed, but his once demure personal assistant is now shockingly, irresistibly forward. Drake is against office affairs, and Ellie is vital to his success, but he can’t get her out of his mind, and besides, he does owe her...

His solution—a two-week break with Ellie at his wilderness hideout. They’ll indulge in a scorching, private affair, and when it’s over they’ll return to their normal lives. But as Drake discovers more about Ellie, he realises her quiet exterior hides a backbone of steel. When she asks him to walk away from his ultimate goal, he knows it’s time to let her go.


READ AN EXCERPT
Drake shut his eyes and leaned his forehead against the wall. His heartbeat gradually slowed as relief trickled into him. She’d be fine once she’d regained her core temperature. The bathroom door was slightly ajar, and through it he heard the squelchy sounds of wet clothing being pulled off. Then the shower came on, and Ellie let out a sigh.

Drake was glued to the wall. His heartbeat revved up again as something other than relief flooded him. He couldn’t move as he listened to Ellie having a shower. Steam curled out of the bathroom, the scent of soap and shampoo teased him, and his fertile imagination went berserk as he pictured Ellie naked in the shower just inches away from him.

He could join her in that shower. Help her get warm and clean again...before he did a few dirty things to her.

Christ. She was killing him.

He tensed, not knowing whether to answer or not. If he did, she’d know he’d been lurking outside all the while like a Peeping Tom.

Damn his undisciplined mouth. And damn the hoarse neediness in his voice.

“I-I’m worried I’ll use up all the hot water and there’ll be none left for you.”

He couldn’t breathe. Was she going to suggest what he was dying to hear? Please, if there was any karma in the world, please let him be right.

If he liked? If? Was the Pope a Catholic?

He banged open the bathroom door and strode in. 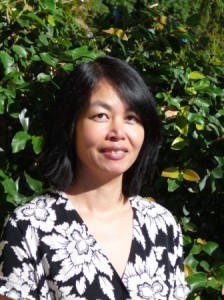 Coleen Kwan has been a bookworm all her life. At school English was her favorite subject, but for some reason she decided on a career in IT. After many years of programming, she wondered what else there was in life — and discovered writing. She loves writing contemporary romance and steampunk romance.

Coleen lives in Sydney, Australia with her partner and two children. When she isn’t writing she enjoys avoiding housework, eating chocolate, and watching Criminal Minds.


Website ~ ~ Facebook ~ Goodreads
Buy the book at Amazon, Barnes and Noble, Smashwords, or Amazon UK.
BR> a Rafflecopter giveaway
Posted by Librarian Judith at 4:00 AM