Jonathan Weeks has stopped by The Library to bring us an interview with his main character, "Chick" Dotson, who narrates THE BRIDGEPORT HAMMER, Jonathan's newest release. Enter the Rafflecopter for a chance to win a $10 Amazon GC.

Tell us a little about your earliest baseball experience.

I had two older brothers who were great athletes. One of them played basketball for Duke University. The town I grew up in was quite rural and there were plenty of places to toss the ball around. I remember playing catcher for my oldest brother at a fairly young age—maybe seven or eight years old. He was in middle school at the time and he refused to take it easy on me. He had a pretty decent fastball. My hand would be smarting pretty good afterward.

Who were your sports heroes when you were young?

My brothers and I took a train down to see a New York Titans game in 1932. That was long before they moved to San Francisco. They played in that weird little stadium that was shaped like a bathtub. I was in awe of all the players. It seemed like such a glamorous thing to do for a living. I consider myself lucky that I actually got to play professionally myself.

Who influenced you the most during your playing days?

Jiggs Rowland was the best skipper I ever had. He was a real players’ manager. Even when he yelled at you (which was rarely), he gave you good advice. I think he got a bum rap in Boston and Chicago. The owners there were way too demanding. They put so much pressure on him, he developed ulcers and a nervous condition that he ended up taking medication for.

Who was the most interesting teammate you ever had?

Definitely Emmett Drexler. He had that crazy blooper pitch that would sail about twenty feet in the air before it reached the plate. Emmett was the most intensely private man I ever met…Never shared a scrap of personal information with anyone. He was always showing up when you least expected it then disappearing in a puff of smoke. Real mysterious. He never got nervous during games, even when he was in a serious jam. I don’t think I ever saw him sweat. It’s too bad he didn’t hang around the majors a little longer.

What was your most memorable game?

There was a pitcher named Lu Salvatore who used to play for the Titans. They called him “The Exterminator” because he liked to throw at hitters. He had such a nasty disposition. I remember he would stomp up onto the mound before every pitch like he was mad at you. I hit a home run off of him in New York once that bounced all the way to the center field scoreboard. It was measured at about five hundred feet. He stared at me all the way around the bases like he wanted to knock my head off. I thought he was actually going to attack me.

What was your most embarrassing baseball experience?

I used to work with a left-hander named Rollie Barrett. He was one of the wildest pitchers I’ve ever played with. Half of his pitches would bounce in front of home plate. I got charged with seven passed balls one day while catching for him. That’s an all time record.

What has changed the most about baseball over the years?

Players are bigger and stronger for one thing. Pitchers are pretty pampered. Back in my day, there were only four men in the starting rotation. During a pennant race, they worked on short rest. The idea of a relief specialist was relatively new. Managers thought nothing of starting a guy one day then bringing him on in relief the next. Seriously, pitchers were expected to throw until their arms fell off. Overall, the game is a lot more gentlemanly today. Players used to fight all the time when I played. And pitchers would try to knock you down at the plate to keep you from getting comfortable. Umpires don’t tolerate that as much nowadays.

If you could change one thing about baseball today what would it be?

There’s too much time in between pitches. In my day, umpires hounded you to keep the game going. I enjoy a nice afternoon at the ballpark as much as the next guy, but games are getting to be over three hours long. It’s time to speed things up.

What is your favorite book or movie?

I don’t read much, but I really enjoyed My Time in Hell by Eddie Black. I used to play with Eddie in Boston. He struggled with mental health issues and ended up in an institution. His book really opened my eyes to the horrors of those places. When the book came out in the 1960s, it was largely ignored. It wasn’t until the 1980s when people finally began to realize that patients were being neglected and abused.

“As you would have the right to expect from any book about a baseball-playing spy narrated by the all-time record holder for most passed balls in a single game, The Bridgeport Hammer is a delight. Jonathan Weeks’ tale of baseball during wartime lovingly gets all the details of the old ballgame right, and does so while spiriting the reader through a fascinating tale of journeymen, espionage, and one unforgettably goofy pitch. Add “the bumpus” of the mysterious rookie Emmett Drexler to the great notions in baseball lore, and add The Bridgeport Hammer to your shelf of baseball classics.” - Josh Wilker, author of Cardboard Gods

A right-hander, Drexler worked from the stretch without a windup. His first offering was a cream puff that Buddy absolutely crushed.

It cleared the wall and rolled to the base of the center field scoreboard, which stands about 460 feet from home plate. Only one player has ever hit a ball off that scoreboard on the fly. It wasn’t Buddy. Nope, that was Huck Bradley back in 1934.

Drexler put a little steam on the next one, but Buddy hammered it over the screen in right field onto Waveland Avenue. The next ten or twelve pitches ended up in the seats. There was hardly a section of bleachers left untouched.

“Looks like your rookie’s on his way back to the farm,” Pierce said mockingly.

“It’s only batting practice,” Jiggs reminded him. He was trying to sound casual, but he actually looked a bit uptight. He motioned for Drexler to bear down harder. Drexler gave a little nod and readjusted his cap.

Then something really strange happened.

Drexler stood with both feet planted on the rubber and his arms hanging limply at his sides. He rotated his right arm in a windmill motion—one, two, three full turns. Then he stepped forward and sort of flicked the ball into the air with backspin. It sailed in a high arc, maybe twenty feet or so, before tumbling lazily toward the plate.

Buddy had an eternity to think about swinging. By the time he did, his eyes were the size of saucers and he was practically salivating. He reared back and lunged for the ball with all his strength, connecting with nothing but air. Unable to stop his forward momentum, he toppled sideways and landed clumsily in the dirt.

“What the hell was that?” Pierce wanted to know.

“Is that pitch legal?”

“I don’t know, but I’m definitely going to look into it.” 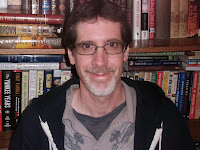 Weeks spent thirty-eight years in the Capital District region of New York State. He obtained a degree in psychology from SUNY Albany. In 2004, he migrated to Malone, New York, and has continued to gripe about the frigid winter temperatures ever since. A member of the Society for American Baseball Research, he has authored two non-fiction books on the topic of baseball: Cellar Dwellers and Gallery of Rogues. His first novel, The Bridgeport Hammer, (a baseball story set during the WWII era) is being released in the summer of 2014. He writes about the game because he lacked the skills to play it professionally. He still can’t hit a curveball or lay off the high heat. Link: Check out his “Cellar Dwellers” blog at: jonathanweeks.blogspot.com. Buy the book at Amazon.