This post is part of a virtual book tour organized by Goddess Fish Promotions. KJ will be awarding an eCopy of Wind to 3 randomly drawn winners via rafflecopter during the tour. Click on the tour banner to see the other stops on the tour.

1. What is the favorite book you remember as a child?

There are a few! The Wind in the Willows was an early one. I also loved everything by Roald Dahl and Paul Jennings, and later on I became a huge fan of Robin Jarvis and Brian Jaques – the latter were my introduction to fantasy.

2. What is your favorite book today?

There are a few of them, too – Coldheart Canyon by Clive Barker, Perdido Street Station by China Mieville, and The Shrine of Jeffery Dahmer by Brian Masters (the last one is non-fiction)

3. Tell us about your current book in 10 words.

A god of dragons, dreams of the future, four weapons.

4. What are you reading right now?

The World of Ice and Fire – a guidebook the world of the Game of Thrones book series, which I love. I’m one of those annoying people who liked the series before it became a TV show. Not that I dislike the show – just the opposite, in fact! I really wish Jon Snow would die horribly and not magically come back to life; I hate that guy. So. Boring!

Both! For a while there I refused to get an e-reader, but I eventually accepted that e-books were the way of the future and got myself a tablet. Once I did I became very fond of it, and these days I have no problem with e-books and have published plenty of them myself!

With that said, I do still love printed books. The smell of old paper always makes me happy for some reason – nostalgia, most likely. An editor of mine once told me that she believes printed books will one day be a luxury item – that ebooks will replace mass produced paperbacks, and only the most successful books will actually see print. That’s coming true as we speak, and I approve. For one thing, it saves a lot of paper!

Bookmark. I’m an archivist when I’m not writing, so I’m very big on treating documents with respect! I only use dogears when reading a magazine – those go in the bin once I’m done with them, so it’s not an issue as far as I’m concerned!

It wasn’t this year, but the worst book I’ve ever read was a self-published fantasy novel called Dragoncrosse. Oh gods it was awful. The second worst was The Fifth Sorceress by Robert Newcombe. Not only was it very badly written, but it was incredibly misogynistic. Some books are so bad they’re outright offensive. I’m also about to read Stephenie Meyer’s new book, Life and Death, just for giggles.

8. When do you do most of your reading?

Anywhere I happen to be when I have a book on me. The bus, bed, the dinner table, the bathroom sink, etc.

The Gone series by Michael Grant. It’s a YA series but would be considered pretty damn gritty even by adult standards. I absolutely loved it, and once I’d finished reading my copies I gave them to a fellow author as a birthday present – and now he’s a massive fan too! Who, ironically, went on to recomment Grant’s next project to me since he read it first. It was also great.

10. What would make you not finish a book?

If I find the characters hateful or if the plot moves too slowly, I’ll probably get bored and stop reading. If it’s bad in the right kind of way, though, I might keep reading anyway just for yuks. 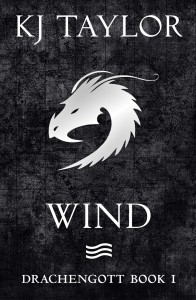 Wendland is a land of dragons, and of magic. The mysterious Drachengott grants magic to his worshippers - but is he truly a god? Rutger von Gothendorf is only a simple furrier, but he has become his village's local eccentric, thanks to his obsession with the murder of his brother by the Drachengott's servants. He holds onto the vague hope that he will one day have the chance to fight back against them - until one day a mysterious and beautiful woman named Swanhild comes into his life. Rutger is instantly smitten - but Swanhild knows more than she says, and a web of lies and deceit threatens to sour the love beginning to grow between them.

And all the while, the Drachengott waits ...

The wind whistled through the darkness, shaking the branches all about and putting a chill into the air. It carried a scent with it, straight to Rutger’s nose. He took it in and immediately tensed.

‘Did you smell that, Horst?’ he hissed, snatching his older brother by the arm.

Horst shook him off. ‘Not now, Rut — we’re in enough trouble without worrying about funny smells.’

‘But it smells like rotting meat!’ Rutger insisted. He paused, ignoring Horst’s impatient look, and breathed in deeply. The smell hit him again — worse, this time. He retched slightly. ‘Can’t you smell it?’

Horst, big and muscular, turned his head in the gloom and sniffed. A moment later, he grimaced. ‘You’re right: something’s dead out there. Come on, let’s move on before we find out what.’

He strode off, Rutger hurrying after him. ‘You don’t think it’s spiders, do you?’

‘Could be,’ Horst said shortly. ‘Keep your eyes open.’

Rutger swallowed and put a hand on the hilt of the long dagger looped through his belt. He had never seen a giant spider before, and he wanted to keep it that way. Silently, he wished he had never asked to come out here into the forest with Horst. But it had all seemed so harmless — just a quick stroll through the forest to check Horst’s mink traps. But then they hadn’t been able to find the last trap, and now they were lost.

I really am the unlucky seventh son, he thought glumly.

If Horst was as worried as his brother, he didn’t show it. He walked slightly ahead, dead mink swinging from his belt. A big old woodaxe hung on his back, brought along for protection. Night was falling now, and the sooner they got out of here the better.

The forest all around was dense and looked threatening, its spiky pine needles sighing in the relentless wind. Night always seemed to come early here. But at least the putrid smell had gone away.

‘How close do you think we are now?’ Rutger asked in a low voice.

Horst shook his head. ‘Not sure — I think there’s a clearing up ahead, though.’

Rutger came to his brother’s side, and the two of them climbed a small rise into the clearing. The instant Rutger left the shelter of the trees, it hit him again: the hideous stench of rotting meat slamming into his nose, so powerfully that his eyes watered. Beside him, Horst had stopped. Rutger heard him swear softly. He looked up, intending to tell his brother that they should go — and then he saw it.

Ahead, in the clearing, a faint light began to glow. It shone on the dark, lumpy shapes which hung from the trees at the far side. Some could have been animal corpses, but the rest . . .

Horst wrenched the axe down off his back. ‘Get behind me, Rut,’ he said sharply. ‘Get out of here. Now.’

As the light brightened, two of the hanging shapes dropped to the ground and stepped forward. They wore rough leather tunics with hoods which covered their heads, but on each of their chests was a pair of red gemstones, set into an amulet. They glowed faintly in the light, making a halo over each of the two men, like a pair of glowering eyes.

One of the pair pointed accusingly at them. ‘How dare you enter this sacred grove?’

Horst started to back away, axe raised.

The two Jüngen joined hands, and the light around them intensified as their linked hands rose. An instant later, a great flash blinded Rutger. He cried out as he fell back, but his voice was drowned out by a screeching roar from above.

A pitch-black dragon was hovering over the Jüngen’s heads, its eyes glowing red. Light crackled over its wings, and it roared again.

The Jüngen let go of each other, and the second of the two spoke to the dragon. His words were a short, cold command. 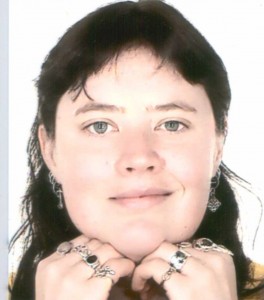 K.J.Taylor was born in Australia in 1986 and plans to stay alive for as long as possible. She went to Radford College and achieved a Bachelor’s Degree in Communications at the University of Canberra, where she is currently studying for a Master’s Degree in Information Studies.

She published her first work, The Land of Bad Fantasy through Scholastic when she was just 18, and went on to publish The Dark Griffin in Australia and New Zealand five years later. The Griffin’s Flight and The Griffin’s War followed in the same year, and were released in America and Canada in 2011. At the moment, she is working on the third set of books in the series, while publishing the second.

K.J.Taylor’s real first name is Katie, but not many people know what the J stands for. She collects movie soundtracks and keeps pet rats, and isn’t quite as angst-ridden as her books might suggest.