Straight Reading from the Library: Choices Meant for All by Sandy Lender

This review is part of a virtual book tour organized by Goddess Fish Promotions. Sandy Lender will be awarding a $10 Amazon or Barnes and Noble GC to a randomly drawn winner via rafflecopter during the tour. Click on the tour banner to see the other stops on the tour.

From the foothills of the Freotho Mountains to the marble halls of Mahriket, factions of deities rise to threaten not just Master Rothahn’s crown, but all of Onweald’s people. The battles fan the gates of the dark spirit world releasing demons of every species to aid the enemy, but Emperor Nigel Taiman brings Malachi’s power to the Arcanan Army’s camp in hopes of tipping the balance in his bride’s favor. Dangerous times call for strange allies from all quarters.

To restore the geasa that will save the god she’s sworn to protect, Amanda Chariss must escape the very Betrayer’s grasp and make choices for the good of all. Does she have the will to sacrifice all that she holds dear in the process? Dive into the action-packed conclusion of the Choices trilogy to discover how prophecy works with and against those who would heed it.

This book is the final book in the Choices trilogy. It can be read as a standalone, but I'm sure you would get a fuller experience reading the books in order. There are enough clues in this book, though, that you can follow the story even if you've not had the chance to read the earlier book.

It starts right off with a bang; the reader is tossed into the action immediately, which is good. You can get a feel for the characters and who they are through their actions. And, there ARE a lot of characters, but Ms. Lender kindly provides a cast of characters which includes not only who they are but also a pronunciation guide for the reader's edification. Thanks for that!

The story is well-told, and it's easy for the reader to get drawn into the action and this world and forget she is reading a book--kudos, Sandy Lender, for a great read! 5 stars.

“Have you been acting a part all along?” He gripped her by the throat. “Have you?”

She tried to loosen his grip. “My dearest one, she’s trying to turn me against you,” Chariss gagged. “She’s using an influencing spell on you to confuse you.”

He lifted her from her feet and drove her to the floor harshly, pounding her head against the dirt. The impact jarred her teeth. For a second, she feared she would lose consciousness.

His knees had her pinned to the ground as Brendan had once pinned her to a boat deck in practice; she had to remember how she’d escaped from the captain’s hold. One of her hands worked at Drake’s on her neck, the other tried to get a grip on his jugular.

While he berated her for inconstancy, while he tugged at the dress of the woman he had claimed to adore, Julette rose from her table and moved to stand before her edras servants.

“Do you understand what you are to do?” she asked them.

The first nodded. The second slurred, “We are to empty our seed in the goddess.”

Drake still spouted venom at Chariss when they overheard the edras, and they froze—motionless. Both his and Chariss’s eyes opened wide. “What?” he asked, looking to Julette.

“Protect me,” Chariss whispered up to him, her voice shaking.

“No, no no,” Chariss whispered. Her nails at his neck turned to a soft cupping of his cheek. “Please, Jamieson, my lord, my love, please protect me.” 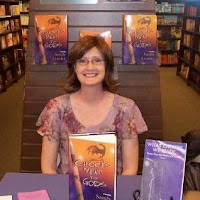 South Florida Author Sandy Lender has been writing since she was a child. At about age six, Sandy entertained the folks in her great grandmother’s apartment building in Southern Illinois with ghost stories of squeaky spiders. She won a first-place award with a sequel to Harper Lee’s “To Kill a Mockingbird” during her school days in the St. Louis area before earning her English degree from Truman State University in Kirksville, Missouri. That led to a career in journalism where she’s worked for a variety of publications the past 23+ years. Sandy is also a sea turtle conservationist, volunteering in the group Turtle Time for nearly a decade. She’s beaten cancer twice, but still fights the IRS. To begin 2016, she welcomes you back to Onweald for the culmination of prophecy.