Straight Reading from the Library: Sentient by Michael Leon

This post is part of a virtual book tour organized by Goddess Fish Promotions. Michael Leon will be awarding a $20 Amazon/BN GC to a randomly drawn winner via rafflecopter during the tour. Click on the tour banner to see the other stops on the tour. 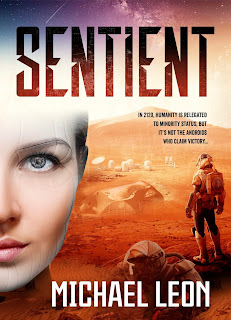 A century has passed and yes, the human race stumbled into evolutionary compromise. But it’s not the androids who are the victors. Post-humans have exploded into preeminence, gaining tech superiority and a tech immunity against the global environmental degradation. Humans are trivialised, a minority species, their one last significant task, restore the environmental damage they inflicted on Earth and terraform off-planets. One human and his ‘biot’ android embark on such a journey to Mars, opening the possibility for an evolutionary path back to greatness, but hostile post-human agents have infiltrated their mission.

SENTIENT is a very action filled science fiction that has its roots in today. I can so see something like this happening in the next few centuries, even if not just 100 years from now. Already technology has advanced to where there are implants to improve hearing - I've heard they have created hearing aids that can actually be tied into an app and your contacts! "This is Jane coming up...today is her birthday."

I am a gadget nut, and I could see the appeal of wearable technology (smart glasses anyone?) Whether or not I would go to the next stage of permanency...well, I digress.

But, there is a true basis for this look at the future - embedable technology, climate changes, viruses and death... all form the basis for an exciting story pitting humans against technology. I could see all the action playing out just as if I were watching in on a big screen, with lots of twists and turns and not really knowing who (or what) to trust.

I was on the edge of my seat the entire time I was reading this book-- highly recommended! I can't wait to read more from this author.

He approached her with dagger raised, causing Zi to back away. Dust continued to swirl from the tunnel creating an ominous mauve fog. What was once a hallowed place filled with joyous child hood memories was now a Cathedral for the dead. She looked into Bayley’s cruel eyes, shocked yet resigned to pay the same price as her father. Terror turned to sadness then resignation that this bitter day would be where her trust finally died.

Bayley turned, reacting to the noise of a small rock that rolled from the entrance of the tunnel, further filling the litter strewn entrance. Then he turned to face her.

“I gave you what you most sought. Love.”

“You call it love. You’ve deceived me more than anyone I have ever known. You’re not human.”

Bayley moved closer, holding his knife to his heart. “An ironic observation. You were starving for love. Was I wrong to deny you some joy in your loveless life?”

“Better a loveless life, than to suffer your dark deceit. Who do you work for? Zhang?”

“You slight me, Zi. I report to a higher order than you’ll ever know.”

“Whereas your code is awash with greed, self delusion and fantasy, unjustly holding onto the most precious deposit in the solar system for a highly disputed aim and supporting lies and half truths to further that cause. I’m charged with laying that case bear,” Bayley said, just a breath from her.

He moved his dagger ever so slightly, before firmly grasping Zi’s neck with his free hand. “Unfortunately, you won’t see the day when I fully expose your illegal operations,” grasping her neck ever tighter.

In the cold silence, Bayley watched the life begin to drain from Zi, before a single shot rang out and echoed across the chamber. He let go his prey and turned to locate the line of fire. A sniper fired another single bullet that ripped through his shoulder, then another, forcing him to release his grasp and run through a hail of bullets to his escape, the tunnel through to the Gates cave, then on to the perimeter. 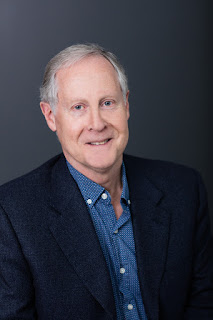 Michael Leon is an explorer, writer and author of the new novel, Sentient. Professionally trained in international trade, Michael has spent the last decade reading and writing SFF novels about new worlds to be explored in the future. His latest work, Sentient, imagines Earth in the year 2120. Michael has traveled extensively around Europe, walking the paths of his characters, from the famous European opera houses in Phantoms to the mountain tops of Switzerland in Emissary.