Straight Browsing from the Library: Fatal Exposure by Gail Barrett 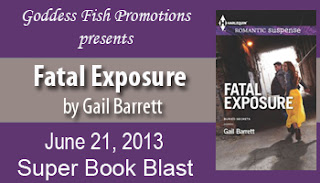 Goddess Fish Promotions has organized a Super Blog Tour for Gail Barrett's Fatal Exposure. Gail will be awarding a $25 Amazon / BN (or other bookstore of the winner's choice) GC to one randomly drawn commenter. See the other stops here: http://goddessfishpromotions.blogspot.com/2013/05/book-blast-2-fatal-exposure-by-gail.html.

Cold-case detective Parker McCall has spent fifteen years trying to solve his brother’s murder. Now a chance photo of the killer in the newspaper sets him hard on the woman’s trail. A former teenaged runaway, reclusive, award-winning photojournalist B.K. Elliot chronicles the harsh reality of life on the streets -- until a photo in the paper reveals her identity, blowing the lid off her secret past. With a powerful murderer now dogging her heels, and her police officer step-father determined to silence her permanently, the last person she can afford to trust is a cop. So why does sexy police detective Parker McCall tempt her to break her silence and resurrect ideals she’d lost years ago? As danger closes in, and with more than her own life at stake, Brynn must decide if the duty-bound cop will betray her...or heal her battered heart.

Cold case detective Parker McCall tightened his grip on the newspaper, his gaze riveted on the photo of the woman splashed across the Baltimore Sun’s front page. She could have been any affluent shopper strolling out of the pricey art gallery—her long, glossy hair tumbling over her shoulders, the collar of her woolen coat turned up against the brisk November wind.

Except for her wary eyes.

The eyes of his brother’s murderer.

The eyes that had eluded him for fifteen years.

He lowered the newspaper to his cluttered desk, the laughter and banter of the detectives beyond his cubicle receding to a distant buzz. Then, hardly breathing, he tugged his wallet from the back pocket of his jeans. Working as carefully as a scientist handling nuclear material, he extracted a worn, faded photo and placed it alongside the page.

For several excruciating seconds his gaze lingered on the image of his younger brother, his heart making its usual lurch of guilt and remorse. Sixteen years old, his cheeks badly hollowed, his body wasted by his addictions, Tommy leaned against a graffiti-sprayed wall near Baltimore’s Inner Harbor, one emaciated arm slung over the waiflike girl at his side.

The girl Parker had failed to find.

He shifted his scrutiny to the girl, taking in her sparrow-thin legs, the baggy sweatshirt dwarfing her scrawny frame, her unruly mop of auburn curls. Then he homed in on her eyes—bleak, world-weary eyes aged far beyond her years.

He sliced his gaze back to the woman in the newspaper. She was still petite, still thin and older than the adolescent slouching against the wall beside his brother, but he’d stake his life they were the same.

A former RITA® and Daphne finalist, Gail Barrett has received the Book Buyer’s Best Award, the Holt Medallion, the Booksellers Best, The National Readers’ Choice Award, and numerous other awards. She lives with her husband in Western Maryland. Readers can contact her through her website: www.GailBarrett.com.

Buy the book: Amazon Paperback Kindle Barnes and Noble paperback and Nook
Posted by Librarian Judith at 3:50 AM