Straight Reading from the Library: The Seduction of Esther by Jennifer Wilck 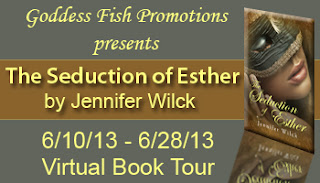 A special thanks to Goddess Fish Promotions to be a part of this tour for Jennifer Wilck's The Seduction of Esther. Jennifer will be awarding a $25 Amazon gift card and chocolate to a randomly drawn commenter during the tour (international giveaway).  The other stops on the tour can be found here: http://goddessfishpromotions.blogspot.com/2013/04/virtual-book-tour-seduction-of-esther.html  Remember to go and comment--remember, the more you comment, the better your chances of winning!

Samara Goldberg has a problem even the most beautiful singing voice can’t fix. She’s a walking disaster, especially when she’s around handsome men. To make matters worse, she’s in desperate need of someone to play the character of Mordecai for the Purim spiel she’s producing and the new congregant, Nathaniel Abramson, is a perfect fit. Nathaniel is a divorced dad who’s recovering from the biggest public scandal of his life. The last thing he needs is a relationship with the choir director at his new synagogue, who also happens to be playing the lead female role of Esther in the very play he’s been coerced into joining.

Woven around the Jewish holiday of Purim, The Seduction of Esther is a story of two people whose lives mirror the plot of the Purim story. Like Esther, who had to hide her Jewish identity from the King of Persia, Samara and Nathaniel are hiding key pieces of themselves. Evil Haman wanted to destroy the Jews, and the nasty Josh will do anything to keep Samara and Nathaniel apart. Will their love survive, like the Jewish people in Shushan, Persia, or will their fear keep them apart?

This is a cute story--I loved the character of Samara, especially her klutziness.  Ms. Wilck has a way of describing a scene so I could see it played out in my head like a movie and the initial meeting between Sam and Nathaniel.

I wish the book had been a bit longer with some more character development, because I really enjoyed the story and would have liked to have gotten to know the characters a bit better.  I hope Ms. Wilck is going to make this a series-- I really liked some of the secondary characters and would like to see more of them.  I can see a whole series of "Matchmaker, Matchmaker" books built around the temple and Joyce's proclivity to help everyone find their soul mates!

The reader can even pick up a few Yiddish words--some I knew, others I didn't.  Ms. Wilck did a good job at scattering them through and defining them without defining them, such as in this exchange:

“I know it’s a good deed, but it doesn’t mean we should get involved. Besides, he’s new; he probably doesn’t know anyone yet. Maybe the right girl is out there and you’re preventing him from meeting her.” 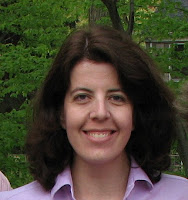 When I was a little girl and couldn’t fall asleep, my mother would tell me to make up a story. Pretty soon, my head was filled with these stories and the characters that populated them. Each character had a specific personality, a list of likes and dislikes, and sometimes, even a specific accent or dialect. Even as an adult, I think about the characters and stories at night before I fall asleep, or in the car on my way to or from one of my daughters’ numerous activities (hey, anything that will drown out their music is a good thing).

One day, I started writing them down (it was either that or checking into the local mental hospital—the computer was way less scary) and five years later, I’ve gotten two book contracts from Whiskey Creek Press. A Heart of Little Faith came out in June; Skin Deep is coming out in November.

In the real world, I’m the mother of two amazing daughters and wife of one of the smartest men I know. I enjoy spending time with my family and friends, reading, traveling and watching TV. In between chauffeuring my daughters to after-school activities that require an Excel spreadsheet to be kept straight, I serve on our Temple Board, train the dog we adopted from a local shelter, and cook dinners that fit the needs of four very different appetites. I also write freelance articles for magazines, newspapers, and edit newsletters.

When all of that gets overwhelming, I retreat to my computer, where I write stories that let me escape from reality. In my made-up world, the heroines are always smart, sassy and independent. The heroes are handsome and strong with just a touch of vulnerability. If I don’t like a character, I can delete him or her; if something doesn’t work, I can rewrite it. It’s very satisfying to be in control of at least one part of my life. My inspiration comes from watching the people around me and fantasizing about how I’d do things differently.

I can be reached at www.jenniferwilck.com or http://www.facebook.com/pages/Jennifer-Wilck/201342863240160. I tweet at @JWilck, my blog (Fried Oreos) is www.jenniferwilck.wordpress.com and I contribute to Heroines With Hearts at www.heroineswithhearts.blogspot.com.