Straight Reading from the Library: Against the Wind by Regan Walker 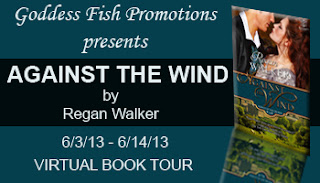 Thanks to Goddess Fish Promotions for a chance to review Against the Wind by Regan Walker, the second book in the Agents of the Crown trilogy. Leave a comment for a chance to win either the first book in the trilogy, Racing with the Wind, or one of a pair of Lunchbox Romances that tie into the trilogy, "The Holly and the Thistle" or "The Shamrock and the Rose" (winner's choice).

A night in London’s most exclusive bordello. Agent of the Crown Sir Martin Powell would not normally indulge, but the end of his time spying against Napoleon deserves a victory celebration. Yet, such pleasure will not come cheap. The auburn-haired courtesan he calls “Kitten” is in truth Katherine, Lady Egerton, a dowager baroness and the daughter of an earl as elusive as she is alluring. She flees a fate worse than death. But Martin has known darkness, too, and he alone can touch her heart—as she has touched his. To the English Midlands they will steal, into the rising winds of revolution.

This book is the second in the series, but it can definitely be read on its own.  Now that I have read it, I can't wait to read the first one, and I'm eagerly looking forward to other books in the series.

Ms. Walker has the rare ability to make you forget you are reading a book--she brings you into the world of Regency and you're there in the midst of the action. The characters become real, the modern world fades away, and all that is left is the intrigue, drama, and romance that is this time period.

Not only do you get a great love story, you might pick up a bit of history along the way because it's evident that Ms. Walker has done her homework.  She even provides notes with the book to give you further insight into what was going on.

If you are a fan at all of historical romances, give Regan Walker's books a try. I don't think you'll be disappointed!
MEET THE AUTHOR

As a child Regan Walker loved to write stories, particularly about adventure-loving girls, but by the time she got to college more serious pursuits took priority. One of her professors thought her suited to the profession of law, and Regan realized it would be better to be a hammer than a nail. Years of serving clients in private practice and several stints in high levels of government gave her a love of international travel and a feel for the demands of the “Crown” on its subjects. Hence her romance novels often involve a demanding Prince Regent who thinks of his subjects as his private talent pool.

Regan lives in San Diego with her golden retriever, Link, whom she says inspires her every day to relax and smell the roses.