Straight Reading from the Library: Untimed by Andy Gavin 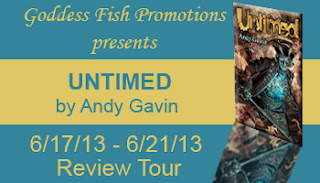 Untimed is a time travel aimed at teens---and time travel is one of my favorite "genres" so I was very excited that Goddess Fish Promotions had this offering as one of the books they were touring. As an added benefit, the author, Andy Gavin, is giving away a $20 Amazon gift card to someone who comments during the tour--it might be you!  Check out the other stops here: http://goddessfishpromotions.blogspot.com/2013/04/review-tour-untimed-by-andy-gavin.html

Untimed is an action-packed time travel novel by Andy Gavin, author of The Darkening Dream and creator of Crash Bandicoot and Jak & Daxter.

Charlie's the kind of boy that no one notices. Hell, his own mother can't remember his name. So when a mysterious clockwork man tries to kill him in modern day Philadelphia, and they tumble through a hole into 1725 London, Charlie realizes even the laws of time don't take him seriously. Still, this isn't all bad. Who needs school when you can learn about history first hand, like from Ben Franklin himself. And there's this girl... Yvaine... another time traveler. All good. Except for the rules: boys only travel into the past and girls only into the future. And the baggage: Yvaine's got a baby boy and more than her share of ex-boyfriends. Still, even if they screw up history -- like accidentally let the founding father be killed -- they can just time travel and fix it, right? But the future they return to is nothing like Charlie remembers. To set things right, he and his scrappy new girlfriend will have to race across the centuries, battling murderous machines from the future, jealous lovers, reluctant parents, and time itself.

This is so NOT your normal time travel story.  It's a story of Charlie and the misadventures he finds himself in when he discovers accidentally that he's not like every other teenager he knows.

He meets Ben Franklin--then changes history by trying to "fix" things so he can get home and, in the meantime, allowing Franklin to get killed.  There's an old poem that goes "For the want of a nail, the shoe was lost."  For the want of Franklin, the revolution was lost-- and the future Charlie gets back to is not the one he left. By any means.

And, how he sets things right (or does he?), makes this story one I think the kids at the library will eat up.  It has adventure, it has a smidge of romance, it is fast paced--I read the book through in one sitting because I wanted to find out what happened.

It's the first book of a series and I'm SO looking forward to reading the rest of them as they come out. Kudos, Mr. Gavin! 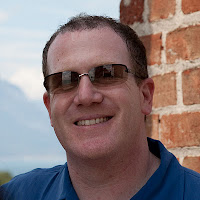 Andy Gavin is an unstoppable storyteller who studied for his Ph.D. at M.I.T. and founded video game developer Naughty Dog, Inc. at the age of fifteen, serving as co-president for two decades. There he created, produced, and directed over a dozen video games, including the award winning and best selling Crash Bandicoot and Jak & Daxter franchises, selling over 40 million units worldwide. He sleeps little, reads novels and histories, watches media obsessively, travels, and of course, writes.