Straight Browsing from the Library: Too Close by Elizabeth Krall 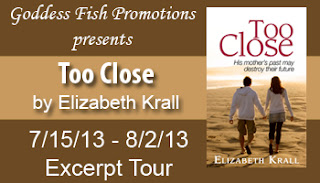 Goddess Fish Promotions is giving us a chance to read an excerpt from Too Close by Elizabeth Krall. Elizabeth will be awarding an eBook version of EACH of her three short stories to a randomly drawn commenter at each stop, plus a grand prize of an eBook version of her first novel, Ship to Shore, will be awarded to a randomly drawn commenter during the tour. The other stops on the tour with more excerpts from the book can be found here: http://goddessfishpromotions.blogspot.com/2013/06/virtual-excerpt-tour-too-close-by.html.

Three weeks before their wedding day, Nicola and Greg discover that they may have the same mother.

They met when Greg joined the San Francisco newspaper where Nicola is the travel editor. After six months, eager to start a life together and raise a family, they decide to marry.

When Nicola finally meets his family in Seattle, and mentions the circumstances of her adoption, Greg’s horrified mother is forced to reveal the shameful secret she has kept for 36 years.

As they struggle to deal with her revelation, their relationship is challenged and strained. If his mother’s suspicions are true, they will be forced into a devastating choice: break all of society’s rules and fight for their love, or break their hearts and give each other up.

It will be the greatest test their newfound love has faced – and their love may not survive.

Scene: Greg has returned to his boat after telling his friends Sam and Debbie what has happened. It’s a Tuesday, and Nicola always goes to Pilates on a Tuesday, so he is surprised to find her waiting for him.

“Are you staying tonight?” Greg asked. He couldn’t stop himself from nuzzling along her neck, working his way down to that sweet little spot where her neck met her chest.

She pointed to her car.

“Do you want to know what I normally do on a Tuesday, while you’re off twisting yourself into knots and swallowing peculiar herbal concoctions?” he asked, as they walked along the pontoon.

Nicola admitted, “I have wondered.”

He slung an arm around her shoulders. “CPE.”

They were at the corner where the main pontoon branched off towards his berth, and there was enough light to see the frown on her face.

“You are going to be so disappointed in me,” Greg warned.

Elizabeth Krall grew up in Canada and lived in London, England, for many years. She has now settled in Sydney, Australia.

Most of her career was spent as an editor, but now she works as a print and digital graphic designer. An unexpected side-effect of leaving editing was the resurgence of an interest in writing. Her first novel, Ship to Shore, was published in February 2012; her second, Too Close, in January 2013.

She is also the author of an occasional series of short stories themed around holidays, called Holiday Romances.

Connect with Elizabeth on her blog or Pinterest.
Buy Too Close on Amazon, BN.com, or Kobo.

Watch the video for Too Close at http://www.youtube.com/watch?v=UVHKZHdBA08
Posted by Librarian Judith at 4:00 AM