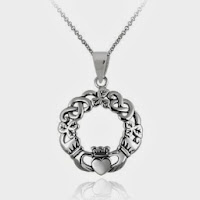 Thanks for stopping in The Library to chat with p.m. terrell. p.m. will be awarding a Celtic Claddagh Necklace to a randomly drawn commenter during the tour. You can see the other stops on the tour here: http://goddessfishpromotions.blogspot.com/2013/07/name-before-masses-dylans-song-by-pm.html.

First, tell us about yourself – where you live, your family, and those sorts of details.

I live in North Carolina in the real town of Lumberton, which is the setting for the Black Swamp Mysteries series. I am originally from Washington, DC so moving out of the city and to a small town was a big leap for me. I love living here; though the summer heat can be brutal, the mild winters more than make up for it.

How long have you been writing?

I started writing in 1968, which shows how ancient I am! My first book was published in 1984 but I didn’t leave my “day job” until 2002, when I began writing full-time. Now I can’t imagine doing anything else.

Do you have a favorite place to write?

I love writing in my living room, where I am surrounded by three of my aquariums. There is something very peaceful about the ten-inch-tall angelfish watching me as I write. Most of the time, however, I find myself writing in my office in between all the other duties that make up a writer’s life these days.

My fantasy is to someday write in an Irish cottage.

Why did you decide to write Dylan’s Song?

Dylan Maguire made his first appearance in Vicki’s Key. His background was quite mysterious, and I knew at some point I would have to take the reader back in time to discover his past and the real reason he left his native Ireland for a new life in America. I loved writing with the backdrop of rural Ireland, which also happens to be the home of my ancestors. And I loved filling in the gaps of Dylan’s past—while his lover, Vicki, hides a secret of her own.

Who is your favorite character in your book and why?

Oh, it’s most definitely Dylan Maguire. There is something about taking a male lead and making him Irish that just transforms him. His speech patterns are very different; his background is uniquely Irish; the way he sees the world is far different from an American male.

He is physical, romantic, faithful and fun-loving; but he can also kill when he must and he is extremely protective. He’s the kind of CIA operative I’d want watching my back!

How about your least favorite character? What makes them less appealing to you?

It has to be Christopher Sandige, a political strategist. Chris is actually a good guy—perhaps too good. An American, he reminds me of a modern-day Jimmy Stewart. He is smart, he’s honest, and he’s likable. But he lacks the brawn and grittiness of a hero. He can rise to the occasion when necessary but not without angst and trepidation—every different from Dylan Maguire, who swings first and asks questions later.

Chris’ Achilles heel is his love for Brenda Carnegie, a street-wise, often sarcastic and most definitely oversexed woman who prefers life on the dark side of the law—much to Chris’ chagrin.

Do you proofread/edit your own books or do you get someone to do that for you?

I do both. I don’t believe in writing a rough draft and handing it over to someone else to make something out of it. So I write the best book I can and edit it at least three times before it goes to an editor.

I do believe in professional editors (friends and family do not count) and I believe that skipping this important step leads to a lot of mediocre books that might have otherwise been great reads.

What do you like to do when you’re not writing?

I love to read books involving time travel, especially when they include ancient Ireland and Scotland and weave true history into the plot.

Because I work with words all day, every day, I often need a break to do something different—such as watching light, romantic comedies and tending to my fish tanks. There is something very relaxing about working with the fish, especially when they have babies.

p.m.terrell is the award-winning, internationally acclaimed author of more than 16 books. Vicki's Key, one of the first books in the Black Swamp Mysteries series, was one of five finalists in the 2012 International Book Awards (Mystery/Suspense) and 2012 USA Best Book Awards (Mystery/Suspense.) River Passage, an historical work based on her ancestor's migration to Fort Nashborough in 1779-1780, won the 2010 Best Fiction & Drama Award. The Nashville (TN) Metropolitan Government Archives determined it to be so historically accurate that they entered the original manuscript into their Archives for future researchers and historians.

Prior to becoming a full-time author in 2002, terrell founded and operated two computer companies in the Washington, DC area. Her clients included the United States Secret Service, CIA, Department of Defense and federal and local law enforcement. Her specialty is in the areas of computer crime and computer intelligence. Her experience in these areas have greatly influenced her books' plots.

She is the co-founder of The Book 'Em Foundation, whose slogan is "Buy a Book and Stop a Crook" and whose mission is to raise awareness of the link between high crime rates and high illiteracy rates. She founded Book 'Em North Carolina Writers Conference and Book Fair, an annual event to raise money to increase literacy and reduce crime.

Dylan Maguire returns to his native Ireland with psychic spy Vicki Boyd. Their mission: to locate and extract a CIA Agent who disappeared in Dublin while on the trail of a known terrorist. But when Dylan receives word that his grandmother is dying, he is plunged into a past he thought he’d left behind forever. His mission and the dark secrets he’d sought to keep hidden begin to merge into an underworld that could cost him his life. He must now confront his past demons and the real reason he left Ireland—while Vicki harbors a secret of her own.

Suspense Magazine says, “p.m.terrell’s writing is powerfully written and masterfully suspenseful; you have to hang on for the ride of your life.” Midwest Book Review says the Black Swamp Mysteries series is “page-turning action, unforgettable characters, breathtaking descriptions and unexpected plot twists.” And syndicated reviewer Marcia Freespirit says the series is “riveting, spell-binding, sexy and intense!”