Straight Browsing from the Library: Flick by Keira des Anges 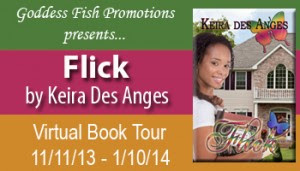 This post is part of a virtual book tour organized by Goddess Fish Promotions. One randomly chosen commenter will win a $50 Amazon/BN.com gift card. The Rafflecopter is at the end of the post, and you can see the other stops on the tour here: http://goddessfishpromotions.blogspot.com/2013/09/virtual-book-tour-flick-by-keira-des.html.

Leanna Matthews enjoys flying below the radar. She does well in school, has a few close friends and hides the fact she’s an astral-traveling telekinetic. But there’s no escaping her creepy dreams or Simora, the bizarre little spirit lady, that suddenly pops out of nowhere to warn her against keeping secrets and predicts an encounter with a sinister evil. For the first time in forever someone…or something…is on to her.

But life turns around when Leanna meets Piper one sunny afternoon. She’s inexplicably drawn to him, almost as if she’s been waiting for him to come. Forbidden to have a boyfriend Leanna throws caution to the wind, lying to her family and friends to be with him, while ignoring Simora’s ominous message.

Yet Piper has a secret of his own. He is on a mission and Leanna, unwittingly, is the key.

He stood idly by Ms. Fenson’s hedges, shifting around uncomfortably and looking at nothing in-particular. After gazing at the sky, he stared at his feet and pulled at the shrubs behind him – which unless he had a death-wish, was an absolute no-no. Ms. Fenson was a legend in her neighborhood and Leanna knew if this guy stood anywhere near the hedges too long she’d most certainly come after him – and it wouldn’t be pretty! Although notorious for her loony behavior, no one denied Ms. Fenson took excellent care of her yard and was fiercely protective of it - in a scary, mad-womanish sort of way.

I’ll just walk by him, Leanna thought, trying to ignore the sudden tightness in her chest. Anyway, who cares? He doesn’t know me from a hole in the ground.

With each step, her legs turned to mush. But an invisible force pulled her forward. The pressure grew stronger, involuntarily pushing her along until she finally passed him; her heart racing, her body stiffening…

She stopped abruptly. Was he talking to her? It was hard to focus; the thumping in her ears grew nauseatingly louder. But since there wasn’t anyone else around, he must be speaking to her. Leanna turned around uncertainly.

He casually strolled over with his hands in his jean pockets. When they finally stood face-to-face, Leanna’s breath caught.

He was even more strikingly handsome up close. At around 5'10, he wore his wavy hair cropped close to his head, and in spite of his loose, red Ecko T-shirt, he sported a visibly muscular build. His chestnut eyes were splashed with the tiniest specks of green and framed by long, dark eyelashes, in stark contrast to his honey brown skin. They were the most beautiful eyes Leanna had ever seen. But it wasn’t the color that intrigued her. His eyes were clear and telling; their depths ran deep. And for a fraction of a moment, she could’ve swore she saw herself.

By day, Keira des Anges has the distinct pleasure of assisting teenagers with disabilities find employment, empowering one life at a time. By night, she is a chew toy for her dog and cat and avid reader of anything spooky, magical and totally out of this world. She lives in sunny Florida with her husband and two kids.