Straight Reading from the Library: Always and Forever Love by Lynn Crandall 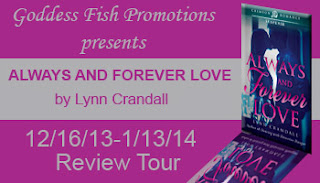 At The Library, we've read Always and Forever Love by Lynn Crandall as part of her virtual book tour organized by Goddess Fish Promotions. Lynn will be awarding a $20 Amazon gift card to a randomly drawn commenter during the tour. You can see her other stops on the tour here: http://goddessfishpromotions.blogspot.com/2013/11/virtual-nbtm-review-tour-always-and.html.

The presence of a ghost in her life doesn't alarm Lacey Aegar, in fact it makes her happy. Two and a half years ago when her dead husband Nicholas reappeared in her life as a full-bodied spirit, she questioned her sanity. But with Nicholas' explanation that there are things about life that are not as she's always believed, she settled into a pleasant routine of working with her sister at their private investigation business and enjoying home life with her now 10-year-old son – with Nicholas never very far away.

Lacey's complacency and sense of stability is sent topsy-turvy when she runs into Jackson Carter, the son of powerful and influential business tycoon, William Carter. Typical of the Carter reputation, Jackson's slick new private investigating business is siphoning off clients from the Aegar sisters' business, creating financial difficulty. It's a recurring nightmare for Lacey, who has already seen damage done by the Carter family, and when she encounters Jackson, she wants nothing to do with him.

But things are not what they seem when it comes to Jackson Carter, either. Unbeknownst to Lacey and her sister, Jackson is fighting a battle to preserve his business, too, and his integrity. For him, it's a fight for his soul, and he enlists Lacey's help because of her unique investigative skills and open heart. When she uncovers a mole in his business, she also discovers that one of his clients' drug trials has been given the green light to go to the next phase based on falsified data. As they work together to save both their businesses, Jackson and Lacey not only face death, they come to grips with their feelings about love and life. With Nicholas's help, Lacey comes to understand that love is always and forever, but in choosing Jackson, she chooses a full life, a life worth living.

This was a sweet story and, at only 126 pages, is easily read in a night. I read it in one sitting and really enjoyed the tenderness and love shown by both Nicholas and Jackson towards Lacey. It reads like a second book in a series (and checking Amazon I found that she did indeed write another story about the Aegar sisters - Dancing with Detective Danger) but this book can certainly stand on its own. There are episodes referred to that date back to that book and it's now on my ever-growing TBR pile!

But, back to Always and Forever Love.... there is a mystery involved and, while some aspects of it seemed a little far-fetched and hard to believe, Lacey's ability to really observe what is going on is crucial at getting to the bottom of it. And, by the time I got to the only part of the book that caused a little niggle, I was so invested in the characters themselves that I was able to pass right over that and get back to the story. No spoilers here, though.

Above it all, though, the story is about Lacey and Jackson's growth as individuals--and that part of the story rings through with every word. Good job, Ms. Crandall. You made me really care about these people and to come to think of them as friends, even in the very short time I was able to spend with them. 4 stars. 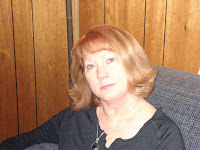 Bio: Lynn Crandall lives in the Midwest and writes in the company of her two cats. She has been a reader and a writer all her life. Her background is in journalism, but whether writing a magazine or newspaper story or creating a romance, she loves the power stories hold to transport, inspire, and uplift. In her romances, she focuses on vulnerable, embraceable characters who don't back down. She hopes that readers discover, over and over, stories of ordinary people who face ordinary life challenges and are transformed by extraordinary love.

a Rafflecopter giveaway
Posted by Librarian Judith at 4:15 AM