Straight Reading from the Library: Anarchy of Angels, Book One: Spiritual Dreams of a Heavenly War by Eddie Georgonicas 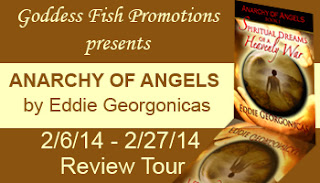 Thanks to Goddess Fish Promotions for providing The Library with a copy of ANARCHY OF ANGELS by Eddie Georgonicas for review. Eddie will be awarding a GC to Rogue Phoenix Press for one free eBook from Rogue Phoenix Press to a randomly drawn commenter during the tour. You can see the other stops on the tour here: http://goddessfishpromotions.blogspot.com/2013/12/virtual-nbtm-review-tour-anarchy-of.html.

Tony’s life has had its challenges and Johnny has always been there for him.

Two young men, inseparable and as close as any two best friends could be.

The Angels have been observing them for a long time. There is a plan in the making and they need their help.

Every rule in Heaven will be broken in order to achieve this ultimate objective.

And as a result, two young friends will die well before their intended times in order to help the Angelic intent.

Maybe, but then again, Heaven gets more than what it bargained for.

And Heaven is in more trouble that it lets on. The boys will come to see this as they go deep into the land of "Fire and Brimstone"

They will come to venture where no Angel dare.

This is a  different look at the spiritual battles in high places--the battle between good and evil, between angels and fallen angels--one in which humans play an important part.

The book starts off very slowly, as the characters and their backgrounds are introduced.  The reader sees how the angels are moving in the background to put humans in position so the overall plan can move forward.

Hang in there, though, because once everyone is in place, the action really begins. And, the author takes you on a trip that's nothing like you expected.  And, sets the stage for the next book.

The book is not a difficult read, but the action is all over the place. The chapters are short which also work towards the pacing.  As a reader, I would have liked to have been inside the characters a bit more--reading Spiritual Dreams of a Heavenly War was more like watching a movie take place. In fact, I could see this as a movie and think it would be an exciting one.

I'm looking forward to the next book to see what further adventures happen with Tony and Johnny--but I'm especially intrigued to see what's going to happen with Charlie and Mary, Tony's parents. 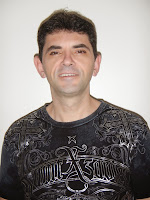 Eddie Georgonicas was born in the city of Adelaide, South Australia, where he still lives with his wife and two daughters. His passion for writing started probably a little later than most but when it came, the story needed to be told.

With keen interests in the Paranormal, After-life, Spiritual, Horror, Fantasy and Science Fiction genres, he hopes to entertain audiences for years to come.

The launch of SPIRITUAL DREAMS OF A HEAVENLY WAR is part of the trilogy "ANARCHY OF ANGELS".

He wishes you a safe journey as you join two young friends as they venture deep into the land of Hades.