Straight Reading from the Library: What's It to You? by Judy Irwin 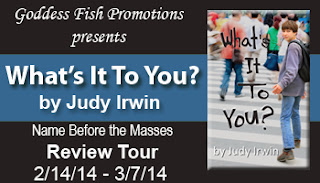 The Library was given a copy of What's It to You? by Judy Irwin as part of a virtual book tour organized by Goddess Fish Promotions. Judy will be awarding a $25 Amazon GC to a randomly drawn commenter during the tour. The other stops on the tour can be seen here: http://goddessfishpromotions.blogspot.com/2013/12/nbtm-review-tour-whats-it-to-you-by.html.

Exciting news!! As part of the launch of this book, the first two books in this loosely-linked series by Judy Irwin are available for free on Smashwords, in all e-book formats, until March 14, 2014. Use these codes for your free download: We’re Done – VX82T What Did You Say? – TX69B Visit Smashwords and search ‘Judy Irwin’ or by book title.

What if nothing was the worst thing you could do?

For 13-year old Tim Stockdale, it's all about keeping his head down and fitting in with the friends he's managed to make at his new school. His older brother, Eli, is the opposite. He's trying to set up a Gay-Straight Alliance at his high school, where he's a junior. Even though the school board is against it, Eli’s not afraid of what the fallout might be.

So when Tim's new friends start to bully a kid they think is gay, Tim's torn - he doesn't want to do anything to risk being cast out of the crew. But when Eli is hurt in a protest, Tim's own failure to do anything starts to get under his skin. Will he find his way at his new middle school, and figure out what's really worth standing up for?


This book is short, but powerful. It's told in present tense, which I don't normally enjoy, but the story itself was so engaging that it only took a little bit to get used to it and sink into the story. It's a quick read told from Tim's point of view as he gets used to a new school, new surroundings, and new ways.

It's hard on him changing schools when his family moves because he's known the other kids at his old school all his school life. The kids at the new school are not friendly, for the most part, so when someone does reach out a hand he grabs it--even when there are things about his new friends that he's uncomfortable with--especially their bullying.

And, even though he doesn't join in, he doesn't stop it--and herein lies the crux of the story. Where's the line?

Because the story is short, there's not a whole lot of character development, but it's not a story that calls for that. Kids of this age (11-14 or so) will quite probably recognize themselves and others in this book. I am so ordering it for the kids at The Library. I know several who need to read this.

Author Judy Irwin's books are about kids dealing with everyday stuff, like parents and divorce, friendships and bullies, and figuring out how to handle different situations and circumstances. She lives in Toronto with a dog, a cat, and a hamster, plus her husband and two children, ages 11 and 14. Judy always wanted to be a writer, and wrote her first book in fourth grade. It was about a boy named Japan, who lived in Japan. She studied English Literature at the University of Toronto, and some of her favorite authors are Judy Blume, Laurie Halse Anderson, Beverly Cleary, Edward Eager and Andrew Clements, and especially F. Scott Fitzgerald.

'What Did You Say?', Judy's first book, is about 12-year-old Tash. The book takes place at a trailer park up north. 'We're Done', Judy's second book, takes place in a middle school. It's about Luke, who first appears in 'What Did You Say?' Tash and Jon, from the first book, are also characters in this one. In 'What's It To You?', Judy's third book, 13-year-old Tim Stockdale (who first appeared as Luke's classmate in 'We're Done'), is figuring out where he fits in at Carlyle.

For Judy, the middle school years are especially interesting since they can be some of the most challenging for kids. It's a time when kids are faced with new issues, and bigger problems, than many have experienced before. As they figure out how they feel, and decide how to respond, they're also figuring out who they are, and shaping the nature of the person they will grow into.