Straight Chatting from the Library: Brian and Juliet Freyermuth

This post is part of a virtual book tour organized by Goddess Fish Promotions. Brian and Juliet will be awarding a $25 Amazon giftcard to a randomly drawn winner via rafflecopter during the tour. Click on the tour banner to see the other stops on the tour.

Welcome, Brian and Juliet, to The Library. Where does your inspiration come from?

Juliet: I do a lot of my writing away from the computer. I take long drives, long walks or play Worlds of Warcraft to relax me until I start thinking about the story. That’s when I usually get that “Aha!” moment. By the time I’m back to the computer, I pretty much know what to write.

Brian: Most of my inspiration comes from dreams. Usually I’ll dream a single scene that will stay with me all day. I’ve collected tons of dreams and story idea over the years in various journals.

Would you ever want to change genres and if so what would you like to experiment with?

Juliet: I don’t think it’s a good idea to limit yourself to one genre, whether you are writing or reading. Urban fantasy is fun to write because it allows me to take a normal city and create a magical world within it. But, I think writing suspense, romance or science fiction would be equally rewarding.

Brian: I love anything fantastical. I plan on writing straight fantasy and science fiction, or basically any story that can fill you with a sense of wonder.

Brian & Juliet: They are a combination of character traits from many people we know, read about or see on TV. Once we’ve finished creating them, though, they are their own person telling us what they want to do. Especially during long drives when we’re the most inspired.

Juliet: Hmm. I will definitely continue writing. There are so many mediums that would be fun to write for: TV, games for health, and nonfiction books that hopefully inspire people to work towards their dreams.

Brian:I will always enjoy writing for games and novels. I’ve been thinking lately about giving back by either guest lecturing or teaching part time at universities.

Juliet: I just finished reading Glitch by Hugh Howey. I’m also rereading Halfway to the Grave by Jeaniene Frost. I like rereading books. I always find I catch something that I missed the first or second time around. It’s also a great way to study the craft, asking questions like how much description does she use during a fight scene, or how does she make me laugh or cry.

Brian: I just finished Skin Game by Jim Butcher. I love how the main character and the world have evolved over the years. Also, the author isn’t hesitant about mixing thing up. One thing I try to do in our books is make sure there is forward momentum for both our characters and the world, not only for the book but for the series as well.

What do you do with your free-time when you are not writing or brain-storming?

Brian & Juliet: We go on mini-road trips all over the area. There are a lot of great parks north of Atlanta where you can go on nature walks. When we’re home, we watch TV shows like Persons of Interest with our son, Kyle.

Juliet: I was a very shy child. I would never even consider letting someone read what I wrote. What would they think? Normally, I wrote psychological thrillers about kids being terrorized by things that go bump in the night. But one day I decided to write a romance. Now mind you, I was 13 and had never kissed a boy, but I wanted to write something happier to impress my Mom, who was alarmed by what I was reading and writing. Stephen King was my favorite author at the time.

I was on the second page of writing the story when it was ripped out of my hands during math class. Not only was it a boy, but it was a boy I randomly picked to be one of the characters. Talk about ripping the bandage off. My first thought was, “Oh my God he’s reading it in front of the class.” The second was, “Oh my God, please don’t let him recognize the character.” Finally, it was. “Oh my God, he’s reading a romance in front of the entire class!” I had to get to know this guy.

But, you know what? There wasn’t any ridicule, no taunts. In fact, some of the people who didn’t know I existed because of my shyness paid a little more attention to me. So when it was time for me to sign up for my high school classes, I signed up for journalism. And the rest, as they say, is history.

Brian: When I was younger, I would explore the woods in the mountains of Colorado just below Pikes Peak. I would fight zombies and dragons with makeshift swords made out of bamboo. My friends and I would also tell ghost stories and think of scary adventures in the cemetery that wasn’t too far from my house. It was like my own little fantasy world right next door.

When a vampire asks Nick St. James to investigate his friend’s murder, the answer should have been easy, right? NO. Okay, not so easy. How do you say no to a friend like Felix?

Besides, with Thelma by his side, what could go wrong? She’s got that, umm … cute pink backpack of Voodoo magic. Of course it hurts that she manages to look good even when she accidentally conjures and gets possessed by a drunk loa. No, it won’t be at all distracting to have her along.

Since no good deed goes unpunished, a crazy man with starry eyes jumps out of the shadows at the victim’s apartment and pummels them. Their attacker doesn’t just beat them up but also infects them with some bad mojo that’s killing Thelma and making Nick angry … angrier.

If the trail to the suspect—the Green Man—is any indication, they’ll be killed before the poison finishes the job. The old gods are more dangerous than helpful. The Watchers—even the one who seems to have a brain—are always a hazard. And what’s with the all the minions? Who has minions anymore? Not to mention the rapid progression of the infection that quickly upgrades Nick’s condition to ‘blind-rage-filled.’

Why couldn’t Felix have just asked Nick to help him move?

“How about a beer?” Felix asked.

“Beer? I didn’t know you could drink that.” A beer actually does sound good, I thought as I put away the coffee beans and grabbed a couple bottles from the fridge.

“We can drink or eat anything as long as it doesn’t have garlic in it,” Felix said as I handed him a bottle. “That shit burns, man. I once saw a couple of vamps have a garlic eating contest.”

He shrugged. “They were bored.”

“Who won?” I asked as I sat down in my old black recliner.

“Their heads caught on fire.”

“Seriously, it was like chomp-chomp-poof.” A ghost of a smile played across his lips. “Our bodies burn out most food. High metabolism or something. Does nothing for the hunger, though. I know a few that don’t eat at all,” he said before chugging the amber liquid.

“Did you know,” he continued, “there’s a dude who actually wrote a book called The Anatomy of a Vampire? He wrote it like fiction so the Watchers wouldn’t get him, but I’ve had a couple of my peeps on the slab over the years. He was right on the money. Talked about how our cells don’t work with food anymore, man. Just blood. How we can eat and eat and eat, but the blood just sends the food packing. Talk about having something go right through you.” He chuckled, although the humor didn’t reach his eyes. “Another reason most vamps don’t eat or drink.” 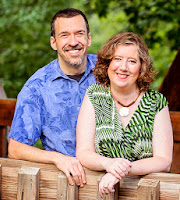 After 18 years of marriage, Brian and Juliet Freyermuth decided to try something crazy; write a book together.

Brian’s writing is not limited to print. For twenty years he wrote and designed games such as Fallout, Star Trek: Starfleet Academy, Epic Mickey 2 and Lichdom: Battlemage.

Juliet’s love for writing began with a fourth grade assignment. She has been writing ever since. Her writing took a new direction when she enrolled in journalism and met amazing people. Whether it is an article about anthropology or a hero’s journey in a magical world, she hopes to inspire readers to new possibilities.

When Brian and Juliet aren’t writing, they enjoy reading, watching shows like Persons of Interest and going on road trips with their son, Kyle.