Straight Browsing from the Library: Secret Blend by Jennifer Bramseth

This post is part of a virtual book tour organized by Goddess Fish Promotions. The author will award a $25 Amazon/BN gift card to a randomly drawn winner via Rafflecopter. Click on the tour banner to see the other stops on the tour.

When longtime courtroom rivals Rachel Richards and Brady Craft get appointed to the bench in Bourbon Springs, Kentucky, tempers flare as they are forced to share chambers.

Working closely with the obstinate-yet-sexy Brady is not an attractive idea to Rachel—although she has to admit that Brady himself is pretty damned attractive.

Rachel doesn't have to run for office to keep her judgeship, but Brady does. He draws a formidable opponent, Hannah Davenport, a wealthy co-owner of Old Garnet Distillery, where some of the finest Kentucky bourbon is crafted north of town along Old Crow Creek and near the historic springs which gave the town its unique name.

And Hannah just happens to be Rachel’s best friend.

As the judicial race heats up, so does the relationship between the judges—so they decide to keep it a secret.

But can any secret be kept in little Bourbon Springs, Kentucky?

SECRET BLEND is the first book in the Bourbon Springs Series, an upcoming nine-book series of smooth, sensual, sexy, slow-burn contemporary romances set amidst the lush and rolling Land of Bourbon and Bluegrass of central Kentucky.

“I believe congratulations are in order,” Brady acknowledged as Rachel arrived in his midst. He offered her his hand, and she shook it.

Rachel couldn’t remember the last time she’d shaken his hand or touched him at all. He had a very strong grip, but his hands were remarkably soft. She considered him; even with that five o’clock shadow he still looked pretty damn good that late in the day, and his tousled dark hair added to his allure. He had a latter-day Greek-god quality about him that Rachel had always found a bit too attractive, just a shade too distracting and unnerving.

“Thanks,” she said, feeling herself blush. “I was surprised.”

He nodded, and she figured he had to be thinking you weren’t the only one, sister.

“Look,” he said, placing his drink on a nearby table, “I’ll tell you straight out, but this shouldn’t come as an unexpected revelation.”

“Well, that I plan to run for the seat myself.” Her mouth dropped open. “Oh, come on, Rachel,” he said in a mocking tone. “You can’t be that shocked.”

The pure exhilaration of the day had been destroyed by his pronouncement. She should’ve realized he would run for the bench against her and felt stupid for her naiveté. Taking a deep breath, she stiffened, and stood up straighter.

“Well, that’s good to know,” she said in a flat tone. “Thank you for telling me yourself.”

She nodded to him, turned on her heel, and left. As she walked away, she thought she actually heard the jerk laugh at her.

But then she felt his hand gently pulling on her arm. 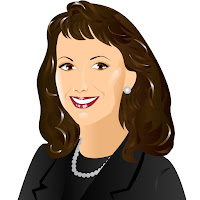 Jennifer Bramseth is an attorney in the active practice of law in the Commonwealth of Kentucky. A Kentucky native and life-long resident, she lives within ten minutes of the state’s oldest bourbon distillery and works within five minutes of two others. A graduate of Centre College and the University of Kentucky, she loves a good Kentucky bourbon with water and ice.

Buy the book at Barnes and Noble OR Amazon.