This post is part of a virtual book tour organized by Goddess Fish Promotions. Perrin Pring will be awarding a $20 Amazon or Barnes and Noble GC to a randomly drawn winner via rafflecopter during the tour. Click on the tour banner to see the other stops on the tour.

Big personalities stuck together in the confines of a spaceship.

What are you reading right now? I’m reading James Clavell’s King Rat. After that I’ve got John Green’s The Fault in Our Stars lined up. I figure I’ll be reading Green’s book on my next plane ride. It’ll probably cause me to bawl my eyes out, which I’m sure everyone around me will enjoy.

I like e-books, but I love hunting through used book shops. It’s like a treasure hunt. I can spend hours in used book shops, much to my friends’ chagrin. You just never know what you’ll find. For me, finding the book is really fun. Not as fun as reading it (hopefully) but still very fun.

I used to have about three books going at once. I’d usually have a non-fiction book, an audio book and a fiction book. Currently I just do one print book at a time, but I don’t know why I made that transition. I always have an audio book in the car, but sometimes I don’t drive my own car for weeks, so I’ll have to skip backwards to remember what’s happening.

Bookmark. I was actually just on vacation with my family, and my brother was reading my third book, The Degrees of Destiny. I realized he was dog-earring the pages, and it was like an invisible punch in the gut. I actually stopped walking when I noticed it. I didn’t say anything though because it was his copy and he was so into the story he was skipping meals, so I that was a huge compliment, but still, I’m cringing thinking about it.

Eighty Days: Nellie Bly and Elizabeth Bisland's History-Making Race Around the World by Matthew Goodman. I was so excited for this one, but Goodman just dragged it out. He had about 100 pages of material, and stretched it into nearly 400. Also, by the end of the book I hated both Nellie Bly and Elizabeth Bisland, yet they were both INCREDIBLE for what they did at the time. A major disappointment.

While I loved James Clavell’s Shogun and Donna Tartt’s The Goldfinch, I think my favorite was Andy Weir’s The Martian. I put the book down to go to sleep and then picked it back up in bed and read until 2:30 in the morning. It was compelling and fun.

I actually give them away, or I re-sell them. As I said, I’m huge into used book stores, so it’s easy to sell my less favorite reads back. A book I like though I’ll keep and give to someone who I know needs to read it, or I’ll just keep it because it was so amazing I want it on my shelf.

Wanton hate. Being racist or sexist just because people are entitled to their own opinions makes my opinion of your book register in the ‘not worth finishing’ zone. Also, violence just for the sake of violence or cruelty against animals. Also, having female characters exist solely to get raped then saved by a ‘hero’ disgusts me. This isn’t to say that I won’t read books that include themes of sexism, racism, general violence, animal sadness, or violence against women, but you’d better be proving a worthy point with said themes.

I re-release them back into the world pretty regularly. Once someone left a copy of Gregory David Robert’s Shantaram on my work car. I know people have strong opinions on that book, but it was exactly what I needed at that point in my life. I like thinking that maybe at some point I did that for someone else, or I will do it in the future.

Filion felt safe in his role as a Dream Searcher. He was paid to venture into other’s dreams and exert influence over individuals whom he would never meet in the flesh.

But that was until he received The Summoning. Filion has been called to track down and protect Ryo, the last of the Chozen. She is the only hope of preventing a tide of evil driven by the Afortiori and the prospect of universal slavery if they aren’t stopped.

Time is ticking and Filion has no idea of how to find Ryo let alone how to protect her, yet destinies of planets rest in her hands. Enlisting the help of a rag-tag band of mercenaries, Filion will set out to search the wastes for Ryo. Together they will confront an evil whose power they just might have fatally underestimated.

I was a natural flier, I could take a punch, and I was smarter than most. Within five years I was a full-fledged pilot. On my last assignment, I was Master Pilot Eri Everfar, commanding pilot of a class B Federal war ship, the Seeker, and that’s where I met him, Drakier Lu…

Filion and his new friends have escaped Bok and are stuck in an asteroid field that isn’t supposed to exist. They’ve almost run out of fuel, their water supply is seriously depleted, all of their food has been destroyed, and the girl they’d just risked everything to save, Ryo, is dead.

Captain Eri’s former lover, Drakier Lu, has been promoted to Master Commander of the entire Federal Fleet, and his assignment is to find and capture the Dark Horse. Captain Eri has been identified as a Tiori, and she and her associates have just become the Federation’s most wanted. Things aren’t what they seem though, and the line between good and evil blurs as the players’ true motivations come to light.

Filion and the crew return, traveling the galaxy and dodging the Federation and the Tioris, all the while searching for a rogue planet that may or may not be harboring the one person who can save them all…

When I was on Lamu, I inhaled an Afortiori's vileness. That blackness will be what allows me to win. I will use their own evil against them. Because of this I am tainted. I am but a degree different from what I fight, but in that degree, hangs the balance between universal slavery and Free Will.

Having fled from Lamu only moments before its destruction, Filion and his friends find themselves hiding in the shadows as the Federation and the Afortiori mobilize against their worst enemy, The Etulosba and its crew. The Etulosba, Ryo, plans for her final battle. She was engineered to fight for Free Will, but to win that war, she will have to become what no Chozen was meant to be - an Afortiori. Caught in Ryo's wake, Captain Eri is torn between leading her crew and confronting Drakier Lu, her former lover and torturer. Will she be able to overcome what he did to her, or will she fail, thereby becoming what he made her and letting down Ryo, her crew, and ultimately, the universe? Filion and the crew return in the final installment of The Ryo Myths. Join them as they begin a journey that not all of them will survive.


READ AN EXCERPT FROM Appointment at the Edge of Forever


She barreled blindly through the forest, not knowing where she was going, only that she had to go. She had to get away, away from whom she didn’t know, but she had to move. They were watching her.

Memories flooded through her. She was on a ship, she was in a car, she was healing the sick, she was giving orders, she was lost. These memories weren’t hers, yet they felt so natural. They felt so real. It was her, Ryo, in those memories, but she couldn’t recall any of them any more than one could truly recall a dream.

She stopped running. Her side ached from the exertion, and her right leg still bled painfully. She peeled back the dark, sticky dress. The cut was deep. It wasn’t going to heal on its own. Then the bubbling came back.

Her hands moved over her leg, and she gasped. The bubbling grew, the hotness, the confidence, the power; all of it came back. She closed her eyes and the pain peaked, then it was gone. She waited several breaths, and then finally opened her eyes. Other than the dried blood and torn dress, one would never have known her leg had been injured. The skin was flawless without even a hint of a scar. She looked at her hands. She had known exactly where to put them. It was as if she had done this every day of her life...

She stood up and quickly sat back down. Her legs shook, and her breathing was ragged. What was happening to her? 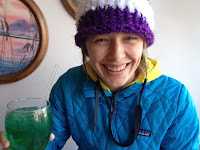 Perrin is the author of The Ryo Myths, a sci-fi/fantasy trilogy that has been heralded to engage both nerds and non-nerds alike. Check out her books on Amazon and Barnes and Noble. When not writing, Perrin enjoys drinking coffee and swimming, although usually not at the same time.