This post is part of a virtual book tour organized by Goddess Fish Promotions. David will be awarding an eCopy of The Biker and the Banker's Daughter to 3 randomly drawn winners via rafflecopter during the tour. Click on the tour banner to see the other stops on the tour. 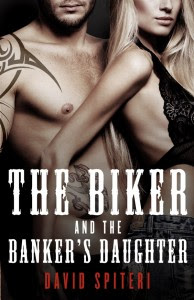 Mimi had never been on a motorbike before she met Peter Winifred, president of the Miners Motorcycle club. He is smitten the second they meet, but she isn't so sure she wants the life of the Prez's girl.

These are saucy selected scenes that reveal the sexy underbelly of an outlaw motorcycle club, taken from the bestselling true-to-life novel THE PREZ.

Winnie was lying in bed trying to recall what had happened the night before; all he could think of was Mimi — he could still smell her perfume — but he couldn’t work out exactly what had happened. He opened the back door and saw his mates lounging around the backyard.

‘You sheriffing cunt,’ Brian yelled. It was a good thing he smiled.

‘I know. Do you want to know what happened?’

‘Yeah,’ they all answered, anticipating a lewd story.

‘When we went for our stroll in the sand dunes we sat down and she rolled me a smoke of marijuana.’

‘The bikies in the States are into that,’ said Kev. ‘What was it like?’

‘Better than piss, mate. We both just lay there smoking while I played with her titties. Fuck, they were nice.’

‘Yeah, I noticed,’ Brian said and grabbed his crotch.

‘Go on, Winnie, what happened?’ Ocker always wanted to know every dirty detail.

‘It turns out she’s some rich cunt’s daughter from Rose Bay. You wouldn’t believe it, after you blokes left I was trying to think where I could take her when she jumped off, got in a taxi, said thank you and fucked off. I still can’t believe it.’

‘Bullshit,’ said Kev and the boys laughed until they almost cried.

‘Fucking oath, boys, I suppose she’s telling her rich girlfriends all about it by now. The only good thing about last night was the marijuana. There could be a decent earn in that for us. We’d better look into it.’

David Spiteri was a founding member and President of one of Australia's first biker gangs. He is 'semi-retired' from the club now. He saw outlaw motorcycle clubs (OMCs) develop from loose affiliations of like-minded riders to the well structured and well connected groups we see today, with links to police, politicians and lawyers. David lives in Rosebank, Northern NSW. Find the author at Facebook. Buy the book at Amazon.