Straight Browsing from the Library: Rachel's Guard by Jillian Jacobs

This post is part of a virtual book tour organized by Goddess Fish Promotions. Jillian will be awarding a $25 Amazon or B/N GC to a randomly drawn winner via rafflecopter during the tour. Click on the tour banner to see the other stops on the tour. 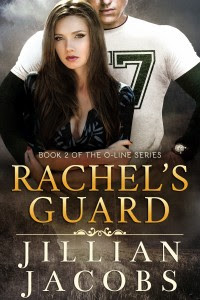 With his grandmother’s words, pro-football player Warren “Bronco” Murray’s picture-perfect world takes a direct hit. After mistaking him for a man from her past, Bronco believes his grandmother’s confused confession reveals the man who raised him isn’t his real father. Is his grandmother’s mind slipping? Or is she harboring a deadly secret?

Searching for an answer to a question he’s not even sure exists, Bronco hires Rachel Harris, a local private investigator and a woman who brings out his protective—and primal—instincts.

Rachel’s spent her life seeking her own resolution for a tragic mistake made years ago. Unwilling to suffer through another loss, she vows to keep her relationship with Bronco strictly professional. Yet with each step into Bronco’s past, she finds that the players shaping her life also shaped his.

Working together to uncover the facts, they falter when the game turns deadly. Nothing is as it seems and they must fight to unearth the truth buried under past deceptions and lies.

Bronco and Rachel survive personal attacks and shocking revelations only to discover that the answers they sought have created a new path…but will they endure the journey together or falter under the truth?

She moaned as she bit into the brownie. “Oh my God, this is amazing. Orgasm by chocolate, the only way to die.”

After gazing at her mouth for a moment, he shook his head then licked his lips. A sparkle hit those ridiculously blue eyes. “Not the only way to die. Especially if you’re doing it right.”

Pleased to see him emerging from his slump, she teased back, “Doing what right? Baking brownies?” She raised a brow while holding back a grin.

He laughed and rocked back in his chair, which lifted the spindly metal legs off the ground.

“Ooh, I get it. You meant sex. Like you’re good at sex” She waved a hand at his crotch and rolled her eyes. “Kill me by orgasm. Too funny.”

“Listen, little sass-mouth, I’d have no problem proving I’m much more decadent than that brownie. And honey, you’d beg for a double batch.”

In the spring of 2013, Jillian Jacobs changed her career path and became a romance writer. After reading for years, she figured writing a romance would be quick and easy. Nope! With the guidance of the Indiana Romance Writers of America chapter, she’s learned there are many "rules" to writing a proper romance. Being re-schooled has been an interesting journey, and she hopes the best trails are yet to be traveled.

Water’s Threshold, the first in Jillian’s Elementals series, was a finalist in Chicago-North’s 2014 Fire and Ice contest in the Women’s Fiction category.

Jillian is a: Tea Guzzler, Polish Pottery Hoarder, and lover of all things Moose.

The genres she writes under are: Paranormal and Contemporary with suspenseful elements.

Buy the book at Amazon.
ENTER THE GIVEAWAY