Straight Browsing from the Library: True Deceptions by Veronica Forand

This post is part of a virtual book tour organized by Goddess Fish Promotions. Veronica will be awarding a $20 Amazon or B/N GC to a randomly drawn winner via rafflecopter during the tour. Click on the tour banner to see the other stops on the tour.

After his partner was murdered, Simon Dunn was done with MI6. But the cold, violent world of British intelligence never lets anyone go free. Now Simon has been blackmailed into a new job...with a beautiful new partner who's going to get them both killed.

Robotics expert Cassie Watson is a newbie field agent with as much sophistication as...well, a pacifist, vegan computer nerd. Now she's abruptly thrust into the cutthroat world of espionage with a partner who is as cold as he is brutally-and brutishly-handsome.

But when their mission is betrayed from the inside, Cassie will be forced to place her life in the hands of the one man who's anything but trustworthy...

Sitting at the table again, Cassie glanced toward Simon. “You don’t seem the type to cook.”

“I hate stereotypes, don’t you?” He took in her earthy outfit. Her hippie persona was definitely not going to work when they went to meet his contacts. Which brought him to his next question. “What’s your specialty?”

“Robotics.” She shrugged, as though every bombshell of a blonde majored in robotics.

“I know about forty computer languages.”

“Good. You can speak to all the computers we encounter. What about foreign languages?”

“Mexican Spanish fluent, not so much in French. Since I don’t know my role, I’m unsure what skills I’ll need.”

They must have chosen her for a purpose. She’d be the technical expertise, while he handled the practical logistics.

“You’re supposed to be my lover. Are you comfortable with that?”

He watched her reaction. She nodded, swallowed hard, and then dropped her eyes to her potatoes. He’d take that as a no. 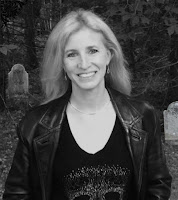 Veronica Forand is an attorney and an award-winning writer of romantic suspense. She's lived in Boston, London, Paris, Geneva, and Washington, DC and currently resides near Philadelphia. An avid traveler, she loves to roam across continents with her husband and kids in pursuit of skiing, scuba diving, and finding the perfect piece of chocolate.

Buy the book at Amazon, Barnes and Noble, iBooks, or Kobo.