This post is part of a virtual book tour organized by Goddess Fish Promotions. Clayton Barnett will be awarding a $30 Amazon or Barnes and Noble GC to a randomly drawn winner via rafflecopter during the tour. Click on the tour banner to see the other stops on the tour.

“There is nothing new under the sun!”  So the writer of Ecclesiastes, one of the more interesting books of the Bible, tells us.  Bad news for those of us that want to make a splash as fiction writers, isn’t it?  And you know what?  I complete agree with him.

Once upon a time in my life, I was a design engineer.  Worked for a company that made the bedding components that other companies, such as Sealy, Serta, etc., would assemble and sell.  Ever had a really bad night’s sleep?  That was me.  I had many, many creative ideas.  Even ended up inventing something, at least in the eyes of the US Patent Office (#5,749,108).  But did it just come ex nihilo into my mind?  Of course not.  I took ‘prior art,’ looked at it in a way no one else had, and there you are.  So, too, I think are these stories we all want to tell.

The ‘big man’ of Corsica, Pasquale Paoli, once said to a very young Napoleon Bonaparte, “There is nothing modern in you; you are entirely out of Plutarch.”  That’s not necessarily a bad thing:  it was that grounding in history that allowed him contain the insanity of the French Revolution before it killed every last person in France in a fit of Progressive purification.  He carefully guided his country through the maelstrom of republic-democracy-anarchy back to the stability of monarchy, as C. Northcote Parkinson detailed a hundred years later.

I look at my 80k word visual novel, my first 52k word traditional novel, and it’s sequel.  Is there, really, truly, an idea in all that that no one, ever, has not written before?  Ever?  I’m sorry, but I’ve not the ego to say, “You Bet!”  However…!

However, are there dozens of pre-existent ideas that have never, never, been put together in just quite this way before?  Here, I do stand proudly and acclaim, “yes!”  Let’s take a short look at what’s on tour right now:  “The Fourth Law.”

Artificial intelligence?  Done.
Androids?  Done.
Breakup of the US?  Done.
Female protagonist?  Done.
Catholic themes?  Rarer, but done.
“BFFs!”?  Done to death.
Cyberspace?  Done.
Three Laws of Robotics?  Done.
Well, now.  Why in the world would anyone want to spend their time, much less their money, on a boring re-tread like this?  Because just like that patent I mentioned, and the Code Napoleon – which is still in effect to this day – sometimes putting together older things in a new, unfamiliar way results in something astonishing.  Am I saying my novel is that good?  I think so, but that’s for the free market to decide.  However, at least I’m honest not only with you, potential readers, but also with you, future writers:  your work is going to be derivative.  Don’t be ashamed of that; don’t try to hide it.  Embrace it, and try to pull from even more!  Pull more derivatives, weave all of those old strands into a tapestry that no one has ever dreamed of before!

It’s all there:  right in front of you!  All you need to do it pick up the threads!  If a silly middle-aged man such as I do it, what in the world are you waiting for?  Tell your story; the elements are at your fingertips! 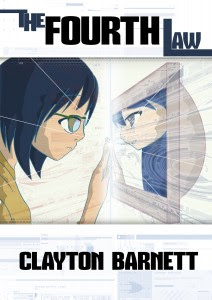 In 2026, 23 year-old apprentice nurse Lily Barrett lives in a shattered time. Following its economic collapse, the US has devolved into a group of a few barely-functional smaller states, and vast swathes of barbarian badlands. Her sister has been missing for years, and her father, after earning the opprobrium of most of the world for running a state terror organization, presumed dead.

Two things keep her going: her live-in job at a small, Catholic orphanage in the city of Waxahachie, Republic of Texas, and Ai, her odd, but dear friend, whom she met online: a young woman who only shows herself to Lily as a rendered CG image.

Troubled by her past, haunted by her name, and facing an uncertain future, Lily seeks only a quiet, normal life. But, that past and her present conspire against her. A new Morning has come, and with it, delights and terrors, happiness and adversity.

Where do we come from?
What are we?
Where are we going?


Lily went off to her right while Ai continued towards the Office building. She’d just started moving the gate when another of Ai’s groupies stepped out of the darkness.

“You. Are you the robot?” The woman’s snippy, non-Texan voice was one thing; calling Ai ‘the robot’ was yet another.

“No, I’m not! This orphanage is closed for the day! Please come back tomorrow... with a donation!” Take that, Carol!

“If you ain’t the robot, you’re Barrett!”

Lily heard an odd, loud pop. Fireworks? She took one step back, started falling backwards. There it was again.

“That’s for closing the Wymyn’s Studies Department at the University!” Lily wondered if that was even English.

She found herself suddenly on her butt; why did she sit down? Running. Was that Ai? She rocked her head up just as Ai leapt over her. Did Ai just kick that rude woman in the head? Suddenly cold, she put her hands across her chest. Why was her chest so wet?

Ai was kneeling next to her. “Lily! You’ve been shot!” 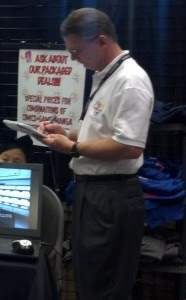 One time engineer, some time pharmacy technician, full time husband and father, Clayton Barnett stumbled into writing a traditional novel last November during National Novel Writing Month. Liking the results, he edited what would become “The Fourth Law” and set about teaching himself self-publishing. In July of 2015, he released a sequel entitled “Echoes of Family Lost,” in what is now called his Machine Civilization series. He is working on a third book – for children – and is making notes for a fourth. Clayton Barnett lives in central Ohio with his wife, two daughter, and two dogs.