Straight Reading from the Library: Elli by Tina DeSalvo

This post is part of a virtual book tour organized by Goddess Fish Promotions. Tina will award a randomly drawn commenter via Rafflecopter a $50 Amazon/BN GC. Also, complete the second Rafflecopter for a chance to win one of ten gift packs donated to your choice of cancer centers. Click on the tour banner to see the other stops on the tour. 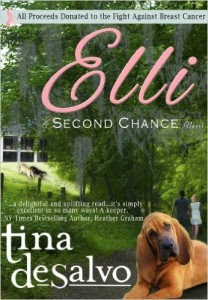 Fortunately, Elli finds herself with half ownership of a Louisiana plantation. A twisted inheritance has set her up with an interesting future. Unfortunately, Elli no longer believes in planning a future, she just wants to take the money and run.

Ben Bienvenu wants nothing to do with the woman from California who is certain to turn his world upside down. But the conditions of the will that left the property to both of them doesn’t give him much choice. Not if he wants to keep the property that’s been in his family for generations.

A snobby diva rental dog, an impossible will, a nosy Bienvenu family, a distracting Mardi Gras season and a man who thinks he is protecting his son by standing his ground against her… Elli knows that trying to find common ground with this man known as the Cajun Dog Whisperer is going to be an uphill battle.

Both in need of a Second Chance….

This is a fun book with some secondary characters who threaten to take over the book (Tante Izzy is a hoot).

It's well written and it's obvious that the author knows her subject well - not only the thoughts and fears of a woman who has fought the cancer battle, but also we get an insider look at Mardi Gras.

There was enough suspense in the book to make it interesting for me, but not quite enough to take it the romantic suspense level - my favorite romance genre. It is a good romance about two people who are very attracted to each other, but whose views seem diametrically opposed.

The main characters, Ben and Elli, both change and grow during the course of the book, almost despite themselves.

This is the first book in a series and I'm looking forward to reading the next- I can hardly wait to reconnect with the Bienvenu clan.

Ben whistled and tapped his hand on the side of his leg. How odd, she thought, why was he doing that? Suddenly, the three energetic dogs from earlier bounded into the bunkhouse and ran straight for her. She swallowed a yipe and fought the urge to run. She had to prove to Mr. Bienvenu that she adored dogs, just like he did, especially after having charged at them with the plunger. When the big, drooling, sable bloodhound stuck its snout toward her crotch again, she held her breath and twisted away from it. When the Marley and Me look-alike beige retriever licked her three-hundred-dollar loafers, she gritted her teeth and smiled. When the medium-sized, brown, black, and tan beagle stuck its big, black nose in her suitcase and shoved her clothes around, she fought the urge to chase it away. Instead, she walked toward Donna, who was barking with fury. “Now aren’t they cute?” she managed to say, trying not to sound insincere and hoping he’d take them back to his obedience school, which they clearly needed.

“They’re yours,” Ben said, a glint in his eyes.

She lifted Donna into her arms. “Mine? There must be a mistake.” Donna growled at the droopy-eyed hound staring at Elli’s crotch. She took a few steps away.

“Actually, Elli, the truth is…”

“Your Aunt Rosa left you her three dogs,” Ben interrupted, sounding much too pleased about delivering the information. He waved his hands toward the ADD pack of canine chaos running around the room, sniffing everything, climbing on the beds, and occasionally licking something disgusting off the floor. God, she hoped that they came with a prescription of Ritalin. Or Valium. 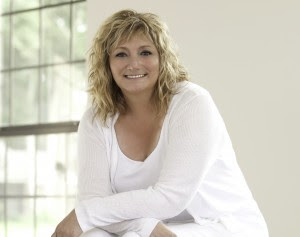 Throughout her life, Tina DeSalvo has filled many roles – daughter, sister, student, wife, mother, journalist. Then one day she took on one she had not planned – breast cancer patient. In an instant her life changed. But as she had done everything else in her life, Tina threw herself into overcoming this role and becoming a survivor.

It was during this time of fighting and healing that Elli was born. Tina took all that she learned, many of the people she met during the battle and poured it all into a book full of heart and humor. Elli is the story of getting a second chance at life after breast cancer. It’s not a book about cancer, it’s about a woman who’s had it. It’s a story that will make you laugh and could even bring tears to your eyes and it’s right from Tina’s heart. So much so that she is donating all proceeds from the sale of Elli to help meet the unmet needs of other women who are going through the same fight she did.

Since Elli, Tina has continued her Second Chance series with Jewell. We hope that you will check out Jewell as well and keep an eye out for Abby coming later in 2016.

Now, as we enter October and another Breast Cancer Awareness Month, Tina is reaching out to share her story and share Elli’s story again. There will be Facebook events and news of other contests and appearances on her website (www.tinadesalvo.com ). And all month long she will be visiting blogs to share her heart and her message. She’s looking to give away Care Packages to ten Centers that work with Breast Cancer patients. You can nominate a Center or Charity that has worked with you or a friend or family member as they went through treatment for Breast Cancer. From all nominated, ten will be randomly picked and Tina will give away a basket full of goodies in the name of you or your friend or family member. Let’s spread the love in October to those that might need it the most.


ENTER THE GIVEAWAY FOR A $50 GIFT CARD