Straight Browsing from the Library: Mind the Gap by Tim Richards

This post is part of a virtual book tour organized by Goddess Fish Promotions. Tim will be awarding an eCopy of Mind the Gap to 3 randomly drawn winners via rafflecopter during the tour. Click on the tour banner to see the other stops on the tour. 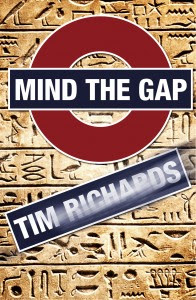 He's been threatened by a knife-wielding maniac on a London train, interrogated by a mysterious warrior woman beneath the city's streets, pursued by a military death squad in Melbourne, had his new girlfriend kidnapped and held hostage in Prague, and been captured and taken to another world.

And it's barely been three days since his life started to fall to pieces.

On top of all this, he's developed a bizarre ability that allows him to teleport in quite unusual circumstances - an ability that several deadly enemies will do anything to gain control of.

The short, dark man bent over the flower and inhaled. Its perfume was hardly noticeable against the thick, heady aroma of the conservatory, but he enjoyed the ritual in any case. Turning, his gaze swept around the chamber. It was still impressive, even though he was intimately familiar with its contents after years of visits.

The conservatory was housed in a structure that resembled a vast, egg-shaped bubble, perfectly smooth and of an opaque greyish white. The curved inner surface seemed to glow slightly, emitting light. It was surprisingly soothing, this gentle glow. The man absent-mindedly fingered the metal badge on his robe as he looked over the greenery around him.

He turned back to the flower, and picked up a slender-handled instrument from next to the pot. He lifted it toward the plant …

… and doubled over in agony as a wave of pain crashed through his mind. All sensation was blocked as he fell, not noticing his impact with the ground. His right arm toppled the table and the plant fell to the floor, its earthenware container smashed. The metal tool clattered along the wooden flooring, its indicator lights flashing.

Waves of colours were moving through the man’s mind, and beyond them he could sense a shape, or concept. It eluded him, but he felt drawn toward it.

Just as it was starting to take form, the screaming stopped. Reality flooded back in.

Despite the residual pain, the man dragged himself to his feet and set the table upright. Leaning against it, he touched his badge again and closed his eyes.

In a moment, he felt the Controller’s mind. It, too, was tinged with shock and surprise.

‘What was that?’ came the Controller’s mental reply, the niceties of formal address lost in the aftermath of the event. ‘I blacked out … we all did …’

The robed man gathered his swirling uncertainties together and hid them behind a mental shield of confidence.

‘Notify all agents,’ he replied. ‘We have found him. This must be the one’.

Tim Richards is a freelance travel writer based in Melbourne, Australia. His writing has appeared in numerous newspapers, magazines and websites, and in Lonely Planet's guidebooks.