This post is part of a virtual book tour organized by Goddess Fish Promotions. Rachel Brimble will be awarding a $25 Amazon/BN GC to a randomly drawn winner via rafflecopter during the tour. Click on the tour banner to see the other stops on the tour.

My absolute favorite genres are romantic suspense and historical fiction (especially when the book includes past British monarchy!), but I mostly read everything and anything. The only exception is intense sci-fi or paranormal. I just can’t stretch my imagination that far. Some of my favorite authors are Nora Roberts, Philippa Gregory, Stephen King & Jodi Picoult.

The characters, always – I think the characters make a story regardless of the plot. You can have the most exciting plot in the world on paper, but I think it’s the characters that jump off the page and make the reader keep turning the pages.

I never leave a negative review and never will – I honestly don’t see the point of criticizing someone’s work publicly. Maybe it’s because I’m a writer myself, I’m not sure, but I was always taught if I’ve nothing nice to say, don’t say anything at all. I use the same thinking about books too!

My absolute favorite is Gone With The Wind, but I also enjoyed Message In A Bottle by Nicholas Sparks and The Green Mile by Stephen King.

I am a huge Jodi Picoult fan but My Sister’s Keeper movie disappointed me because a big part of the book was missing/changed. Spoiled the viewing for me…

Yes! I am a complete bibliophile and my shelves are overflowing. I have special shelves for my author signed copies and all the others are stored in alphabetical order. I have no idea how many books I have in total, but know that I have so many I haven’t yet read that I wouldn’t need to buy another book for ten years if I was to read them all. Yet, I still keep buying more…

Scott Walker doesn't have time for a relationship. The sexy mechanic has career ambitions, not to mention a mother and three sisters to take care of. The last thing he needs is Carrie Jameson, the beauty he never forgot, arriving in Templeton Cove over the holidays with some unexpected news.

Scott still finds Carrie irresistible, and he's not one to shirk responsibility. Scott's issues with his own dad make the prospect of parenthood a minefield. But if he and Carrie can overcome their fears, this Christmas could bring them the best gift of all.

She glanced around the garage. “I’m sorry to turn up unannounced like this, but I’m here and we need to talk.”

He stared at her in disbelief as questions, demands and weaknesses hurtled around inside him, battling with the intense sexual frustration storming through his body. “Just like that, you turn up and say, ‘We need to talk’?” He shook his head and turned away from her, lest he get caught in the snare of her wide, impossibly gorgeous eyes. “Go away.”

Keeping his back to her, he uncrossed his arms and planted his hands on his hips. He tipped his head back and smiled as insanity rushed his bloodstream. He wanted to grab her, shake her, kiss her and make love to her. God, he wanted to drop to his damn knees in front of her and beg her to tell him where she’d been and now she was back, was she back for good?

He closed his eyes, barely resisting the urge to cover his ears with his hands and block out her tempting voice, achingly laced with the unmistakable sound of a plea. “Whether you want to see me or not, I have to talk to you, and I won’t leave the Cove until you hear me out.”

Her heels clicked closer and his body tensed, waiting for what came next. The dangerous, musky scent of her perfume wafted under his nostrils and he inhaled. She approached the bench beside him and put down a business card. “My number’s on there. I’m staying at the Christie. Call me when you’re ready to talk. It’s important or I wouldn’t have come.”

He glanced at the card. Carrie Jameson. Producer.

She turned and walked away. He let her go, feeling like a smashed up car after a hurricane, tossed and turned through the air before being spewed crudely across the highway, left to rust and burn.

He picked up the card. His hand shook and the rare sting of tears shamed him. What the hell was he supposed to do now? Carrie was back and his libido told him only too clearly there was no way in hell he wouldn’t go to her. How was he supposed to let her go a second time when he’d lived the last three years regretting he didn’t stop her the first time? 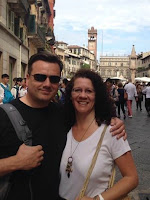 Rachel lives with her husband and two teenage daughters in a small town near Bath in the UK. After having several novels published by small US presses, she secured agent representation in 2011. Since 2013, she has had five books published by Harlequin Superromance (Templeton Cove Stories) and three Victorian romances by eKensington/Lyrical.

Rachel is a member of the Romantic Novelists Association and Romance Writers of America, and was selected to mentor the Superromance finalist of So You Think You Can Write 2014 contest. When she isn’t writing, you’ll find Rachel with her head in a book or walking the beautiful English countryside with her family. Her dream place to live is Bourton-on-the-Water in South West England.

She likes nothing more than connecting and chatting with her readers and fellow romance writers. Rachel would love to hear from you!