Straight Browsing from the Library: Hedon by Jason Werbeloff

This post is part of a virtual book tour organized by Goddess Fish Promotions. Jason will be awarding a $15 Amazon or B/N GC to a randomly drawn winner via rafflecopter during the tour. Click on the tour banner to see the other stops on the tour.


SPECIAL PRICING FOR TODAY ONLY

Pick up the book today from Amazon! It's a free download today only!

What if happiness were compulsory?
What if your thoughts were not your own?
Plunge into HEDON for soul-twisting sci-fi.

In 2051, the Bhutanese Empire rules post-apocalyptic Shangri with iron-fisted Buddhist compassion. Happiness is compulsory, but making everyone happy isn’t easy in an overpopulated world. Breeders are ghettoed, homosexuality is mandatory, and Shangrians’ happiness levels are strictly monitored by hedometers implanted in their heads. Become depressed, or feel too happy without helping others feel the same, and The Tax Man will get angry. Very angry.

Gemini and Cyan, winners of the pregnancy lottery, are on the run. Cyan can’t fall pregnant, and Gemini is addicted to the Experience Machine. Will they evade The Tax Man, and find a way to end the brutal pleasures of Shangri?

The lovechild of Brave New World and The Handmaid’s Tale, HEDON is gritty satire on a dystopia drunk with bigotry and positive thinking.

“A one of a kind dystopian novel.”
“As politically depraved as anyone could desire.”
“This is storytelling at its best”.
– ReadersFavorite.com 5 star review of HEDON

The day before his father died, Gemini had carried the old, old man to the summit of the district heap. Cardboard boxes, plastic packets, clothes hangers, rags, and a thousand other remnants of the past had sagged, crunched and scratched beneath Gemini’s bare feet. By the time he’d reached the top, he was out of breath. But it wasn’t the weight of his father in his arms, clinging to his neck. His father weighed less than a memory. No, it was the thought that this would be the last time they would share the view together.

The heap was higher than the ghetto Wall, higher than the Devas. From the top, they could see it all. Rows and rows, and rows, of tin shacks stretched behind them. And before them, a mile away, was the great Wall, brown as the earth. Beyond was the city, its brown-white spires shrouded in fog. Brown fog.

His father had looked at Gemini then. Really looked. Looked at him, his son, not as a war veteran. Not as someone from the past. “Boy,” his father’s voice was hollow, soaked up by the heap, “are you happy?”

The breath in Gemini had caught. Of course he was happy. Everyone was happy. It was Shangri. But his lips formed a different reply. “No,” he said, and stared out beyond the Wall. His cheeks burned.

“That’s okay, boy. They say they’re happy. But they’re not. Nobody is.”

Gemini swung his head to study his father’s eyes. The blasphemy. Sure, there was unrest here, in the ghetto. Sure, there was discontent. But few spoke such … such blatant heresy. Such negativity.

“Find a girl,” his father said, placing a veined hand on his son’s. “Be happy with her, but not too much. Never forget …” His head twitched. “Never forget that there is more.”

His father fell silent. Gemini scooped together a pillow of detritus so the dying man could lie comfortably as he stared out at the city. The city the old man had fought for, and lost. 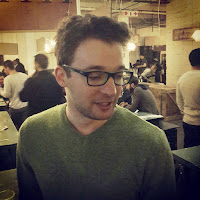 Human. Male. From an obscure planet in the Milky Way Galaxy. Sci-fi novelist with a PhD in philosophy. Likes chocolates, Labradors, and zombies (not necessarily in that order). Werbeloff spends his days constructing thought experiments, while trying to muster enough guilt to go to the gym.

He's written two novels, Hedon and The Solace Pill, and the short story anthology, Obsidian Worlds. His books will make your brain hurt. And you'll come back for more.