Straight from the Library: Maybe Tomorrow by Erin Cawood

This post is part of a virtual book tour organized by Goddess Fish Promotions. Erin Cawood will be awarding a $10 Amazon/BN GC to a randomly drawn winner via rafflecopter during the tour. Click on the tour banner to see the other stops on the tour.

What would you do if your first love was dying?

I leave my books open and flat. I know this damages the spine. I also fold page corners.

Both. You can’t beat the feel and smell of a print book. Same as you can’t walk around an e-Book store. But there are some of my favourite authors who are only available for e-Readers; I’d miss out.

I devour books and don’t put them down until I’m finished so… one at a time.

Ah… Me Before You by Jojo Moyes… The Gift by Danielle Steel… Family Magic by Patti Larsen… there are so many more.

I’d have to find the writing style offensive to authors around the world, and that would mean I’ve been unable to convince myself that the poor writing style is the characters' quirks. It would have to be incredibly dull and a non-starter. And I just don’t connect with the characters at all. I think this latter point is the most important, because you can have the most horrifically written story, and a plot that’s going nowhere fast and yet still be compelled to find out what happened to the characters.

Keep, oh definitely keep. I want a library like this one! 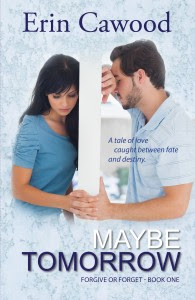 Does a heart ever really heal from its first break? On an unseasonably hot night in late September, Dr. Keon McGowan is called away from a family gathering to a hospital emergency. Amongst his patients that night is a blast from his past he’d rather forget. He’ll certainly never forgive butterfly hunter Darcia Davenport for leaving him alone as a single father while she chased butterflies through the Amazon rainforest. Coming face to face with the woman who broke his heart after all this time, Keon realises that he has never fully healed from it. But any chance of finding closure is ripped away when Darcy chooses to end treatment and live her final weeks without regret. Can Keon let her go? Or will he fight for the tomorrow they might never have? Maybe Tomorrow is an emotional journey of love caught between fate and destiny.

Vibrations shot Dr. Keon McGowan’s hip as he placed a sterile gauze pad against the head of the frightened teenager sitting in cubicle nine. “I think there’s more blood than damage,” he reassured the youngster with a warm smile. Although the fifteen-year-old would need stitches, he’d been lucky on all accounts. Keon looked up at the boy’s parents and continued. “I’d still like a couple of scans. It's routine with head injuries, and it's likely the on-call neurologist will want to keep him overnight for observation just to be on the safe side.”

Keon gave them a nod as he removed his latex gloves, tossed them in the medical waste bin, and washed his hands. He didn’t want to cut their time short, but as the head of London’s largest trauma centre, Keon was acutely aware there were too many patients still awaiting first assessments, and there wasn’t a single cubicle free in the accident and emergency treatment area. He fielded calls between treating patients, unable to move more than ten feet without someone calling his name. It was all in a day’s work, except today, things were more hectic than usual, due to a massive traffic accident involving almost 200 people less than three hours ago.

“I’ll arrange for a porter to come as soon as possible,” Keon promised the parents of the fifteen-year-old at the end of the consultation. “But I’m sure you can appreciate they’re stacked out at the moment, as is the imaging department. I’m sorry it’s going to be a bit of a wait.”

They nodded, and Keon swiftly left the cubicle as his mobile vibrated against his hip again. Quickly, he glanced at the name on the screen. He wouldn’t normally take a personal call in the middle of a crisis like this, but this caller resided on the other side of the world. “I’m sorry, Sarah, but I can’t talk now.”

“Oh, hello, Sarah. How are you? I’m fine, Keon, thank you for asking.” Her sarcasm was not missed, but he was just too busy to acknowledge it. “But I thought I’d make this really important phone call to remind you the doctors at Mount Cook are still waiting for your call.”

“I’m sorry, but I’ve got seventy-three people who were in an RTA three hours ago. I can’t talk about this now.” He didn’t mean to be short, but the board had too many patients for his liking, and his staff grew weary. He didn’t need Sarah on his back right now. He returned to the nurses’ station. “Heather? Can you arrange for the patient in cubicle nine to have a CT scan and page neurology, please?”

Erin Cawood is a commercial women's fiction author, with a taste for dramatic storylines and a passion for strong lead characters she really gets behind, cheering on right to the very end of their story. Her focus? Taking romance into the darker, edgier side of contemporary fiction.