Straight Browsing from the Library: A Simple Vow by Charlotte Hubbard

This post is part of a virtual book tour organized by Goddess Fish Promotions. Charlotte will be awarding a $15 Amazon or B/N GC to a randomly drawn winner via rafflecopter during the tour. Click on the tour banner to see the other stops on the tour.

Housed in a rustic red barn, the Simple Gifts crafts shop celebrates the talents of the Amish of Willow Ridge—and the faith that inspires them. For the acceptance of simplicity opens the path to love.

As far as Edith Riehl is concerned, the baby twins thrust suddenly into her arms are a heaven-sent gift. Unable to conceive, she longs to be a mother with a home of her own. She’s going to abide by her promise to handsome Asa Detweiler to take care of them while he looks for their real father. And even if her domineering dat Cornelius refuses to countenance Asa’s suit, she can only pray the bachelor’s honesty and persistence will uncover the truth—even as he’s kindled an impossible hope for a love of her own…

Asa can’t understand why anyone would think he would be so dishonorable as to father babies and then abandon them. He’s determined to clear his name—but Edith’s caring ways also inspire him to help heal her wounded spirit and earn her trust. In the face of heartbreaking deception, he and Edith must find the strength to understand, forgive…and claim their own hearts’ joy.


“Wonder who it could be?” Luke asked as he and Andy loped down the highway toward the clinic at the next corner. “Most of the locals are still at the wedding dinner or visiting out back of the restaurant.”

“Naz didn’t seem to know him. Could be an out of town guest—or just somebody passing through on a pretty day,” Andy said. “Denki for coming along, Luke.”

Minutes after they reached the Leitner barn, they were rolling down the gravel road that ran past the Riehl place and the bishop’s pasture, where cud-chewing Holsteins gazed over the fence at them. Luke had always been in awe of Andy’s specialized wagon, which was a small clinic on wheels—allowed by Bishop Tom because it was a horse-drawn vehicle their local nurse could drive to medical emergencies or house calls. His pulse accelerated with the mare’s hoofbeats as he gazed up the road. Aunt Jerusalem’s white kapp caught the sunshine as she waved her arm above her head.

“Wow, that’s an impressive horse,” he murmured. “Percheron by the looks of it—although he seems to have a limp.”

“Might want to have Ben take a look at the horse after we see to its owner,” Andy murmured. “The guy’s sitting up now. Let’s keep him still until I figure out how badly he’s hurt.”

Andy stopped the wagon a couple of yards from where Luke’s Aunt Jerusalem stood, her face etched with concern. “Glad ya got here so quick, Andy,” the middle-aged woman remarked. “Now that he’s sittin’ up, he seems determined to be anywhere but here.”

The man had coal black hair and a grass-stained shirt that stuck out around his suspenders. One side of his face was badly bruised and he had an open wound in his forehead. He appeared dazed as he looked up at them, and he was placing his hands on the ground as though he intended to push himself up. “Where am I?” he asked hoarsely. “I have no idea how I came to be—” 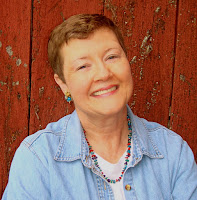 Many moons ago—like, in 1983 while she was still a school librarian—Charlotte Hubbard sold her first story to True Story. This launched her into writing around seventy of those “true confessions” stories over the years, and she’s been a slave to her overactive imagination ever since. Over the course of her writing career, she has sold nearly 50 books—most recently, Amish romance series she’s written as Charlotte Hubbard or Naomi King.

Charlotte lived in Missouri for most of her life, so her Amish stories are set in imaginary Missouri towns. These days she lives in St. Paul, MN with her husband of 40+ years and their Border collie, Ramona.