Straight Browsing from the Library: Fibers by Jennifer-Crystal Johnson

This post is part of a virtual book tour organized by Goddess Fish Promotions. The author will be awarding a $10 Amazon or B/N GC to a randomly drawn winner via rafflecopter during the tour. Click on the tour banner to see the other stops on the tour

Anna Reynolds is caught up in the middle of a secret interdimensional government agreement... and she doesn't even know it.

There's a medical anomaly loosely dubbed Morgellons disease afflicting a number of people. Symptoms include open sores that produce colorful string-like fibers, fatigue, and nightmarish visions of shadowy figures. No one knows where it came from. No one knows what causes it. There is no cure.

When Anna begins having nightmares and waking hallucinations of the shadow people, her uneasiness about her condition grows. Enlisting the help of her doctor and some friends, Anna is determined to find out what's really going on and why Morgellons is such a mystery.

With her health declining and doubts about whom she can trust, is Anna doomed to become a slave to her condition? Or will she and her unlikely group of would-be heroes come through, saving her... and, ultimately, the world?

Standing slowly with her palm pressed to her eye, she spotted a tiny clump on the counter not far from the tweezers. It looked like balled up blue and red string wrapped in eye goo. But when she touched it gingerly with her fingertip, it felt hard, similar to rock or crystals. She turned off the water.

Not wanting to leave this cluster of strange unattended, she picked up the tweezers again and pinched the whole mess between the tips. Cupping her left hand underneath, she took it to a kitchen counter and turned on the overhead light.

Squinting her hazel eyes, she poked at the tiny mass with the tip of the tweezers, suddenly wishing she had another pair.

“What the hell are you...?” she muttered under her breath, trying to keep her breathing shallow so she wouldn’t accidentally exhale it away and lose it. She noted that her eye felt perfectly fine. A little sore, but not bad. She decided to get a toothpick from the silverware drawer and pinched the balled up fibers in the tips of the tweezers again. Just in case.

As she loosened the tweezers and brought the toothpick closer to the tear duct excretion, she watched the blue string she had pulled on stretch itself slowly toward the wood.

“No way,” she muttered, moving the wooden toothpick closer. She moved it left, then right... each time she moved it, the tiny string followed. She saw the red one poking out from the tangled mass, too, and she dropped the tweezers and the toothpick, stepping back and taking a deep breath as she cupped her hand over her mouth. 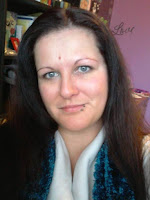 Jennifer-Crystal Johnson is originally from Germany, but was raised an Army brat. She has published one novella under her former last name, The Outside Girl: Perception is Reality (Publish America, 2005 - out of print as of 2013), a poetry book, Napkin Poetry (Broken Publications, 2010), and a collection of poetry, art, and prose called Strangers with Familiar Faces (Broken Publications, 2011). She's also published a collection of short creature horror stories called If You're Human Don't Open the Door (Broken Publications, 2012), a personal development book called The Ten Pillars of a Happy Relationship (Broken Publications, 2014), and a collection of more horror stories (no creatures this time, just people) called Our Capacity for Evil (Broken Publications, 2015). She has several poems and short stories published on Every Writer's Resource and has recently published a science fiction novel called Fibers, the first book in the Infiltration Trilogy. Jen owns and operates Broken Publications (www.BrokenPublications.com) and publishes an annual anthology to raise awareness about domestic violence called Soul Vomit (www.SoulVomit.com). When she isn't writing or editing, she enjoys playing games with her three kids, watching crime shows on Netflix, or reading. She lives in WA State with her three children, three cats, and a crazy puppy named Thor. You can connect with her at http://www.JenniferCrystalJohnson.com, http://www.twitter.com/brokenpoet, or www.Facebook.com/JenniferCrystalJohnson.