Straight Reading from the Library: Emissary by Michael Leon

This post is part of a virtual book tour organized by Goddess Fish Promotions. Michael will be awarding a $15 Amazon or B/N GC to a randomly drawn winner via rafflecopter during the tour. Click on the tour banner to see the other stops on the tour.

Michael published his first novel in September 2015 and he is now excited to release his new novel. Emissary is his second novel and it is very different from Cubeball. Where Cubeball explored themes of sport, drugs and gambling, targeting mostly a male demographic, Emissary journeys into the realm of romance in an expansive backdrop of the multiverse (multiple universes).

"I believe this novel will appeal to a wider demographic than Cubeball. Both male and female fans of sci-fi should find this novel an intriguing and enjoyable read."

Emissary tells the tale of Vincent, a scientist plagued with strange nightmares since childhood. He has successfully treated his mental illness with drugs and kept it hidden from his colleagues, particularly Ella, the beautiful and intelligent scientist from whom he also struggles to hide his affection. But what if his experiences were real and the dark energy that crawls inside him now threatens the existence of the universe?

As his nightmares return, Vincent unravels the secrets of his past, with the help of Ella and ever-guarded Constantine. Revealing their other-world origins, they need his help to destroy the Entity that was created when Ella created a portal to Vincent’s universe. As Vincent grapples with his love for Ella, he traverses Europe in pursuit of answers, learns how to travel at the speed of light and confronts his perception of what is real. But can he trust his friends? Could he ever truly be with Ella, and what is his scientific destiny so revered by his colleagues.

Emissary is a science-fiction adventure novel that travels at the speed of light, where multiverse theory collides with quantum mechanics on the dark side of Saturn’s moon.

Have you ever wondered about what might happen if you had made different choices? This book explores the idea of multiple universes and does so in a way that instantly caught my attention! I absolutely loved this book and all the characters. Vincent is, I think, my favorite, and my heart broke for him at times - so I was glad to see the author give him the ending he deserved.

I was a little frustrated when Ella was not as forthcoming as she could be-- putting him into situations and then telling him to just be patient; it wasn't time to explain everything yet and to trust her. I get where she was coming from, but I identified with Vincent so much that I felt that frustration with him (honestly, he bore it better than *I* did!)

I highly recommend this book-- but don't read it unless you have time to sit down and really get involved. You won't want to put it down! 4 stars

Vincent willed himself to see her true appearance, feeling her presence all around him, hovering close. Yet his gaze remained thwarted by the radiance.

“I feel you, but the light blinds me.”

“Look within. Believe and you will see. Trust your senses and listen to the sound the light makes. Then follow its rhythm.”

Vincent stepped closer into the glow, letting go his instinct to find Ella’s melodies. It was then he heard her real voice, not human, indescribable. He could not understand but he felt fragments of her alien core. The falling snow’s vibrations gathered strength, revealing rainbow colours of such clarity he wanted to stroke their soothing rhythms.

The patterns on each vibrating snow-drop linked, taking form. A presence slowly formed, circling him, building his desires, like an elusive drop of water in the desert. Vincent reached out to touch the mirage-like form and caressed the desert gold shadow before him. He felt an energy surge through his body, creating a subtle shift in his awareness, as if he were no longer in his body. The force drew him toward its centre. In that place, he felt Ella’s warmth. His mind’s eye floated, circling his body as if dancing around it. He felt an intense urge to look up. He was hungry to find Ella, to be with her.

And then his feelings willed him higher above the soft powdered landscape. He was bathed in a warm gold lit fountain of energy. There he saw an outline of Ella, like a rough sketch of her true self. She shimmered around him, gliding her light web softly across his face. Vincent felt her sweet force ripple across his skin. Its soothing sensation made him want more.

“I love you Ella. I always have,” he said, desperate to show his true feelings for her. Ella laughed softly as she drew her force closer to him.

“I believe you do, my Earth friend. I think this is what Constantine dreamt of. Our developing bond here on the mountain top,” she whispered in a musical tone so close to him he desired more.

“Is our love meant to be?” he said, hoping to hear her melodic tones concur. But instead Ella released Vincent from the gold lit fountain, returning him to the cool snow covered ground.

He looked to the sky. Clouds swirled above him, driven by soft winds. High above him was the eagle he heard earlier, now in clear sight, circling. At first he wondered if it might be Ella, but those soaring wings shimmered amongst the turbulence, a vibration he well recognised. For around it formed a grey mist, from which other shapes formed, until a flock of eagles gathered.

Vincent knew this was not Ella. It was her antithesis. 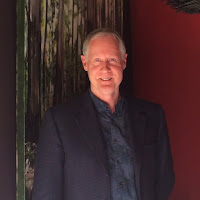 Michael Leon is a science fiction writer with two published novels: Cubeball and Emissary. Besides those, Michael has written Extinction and Adaption and is currently writing Alive, which will be released in late 2017. His work blends speculative fiction with a social voice. Michael was born in Melbourne, Australia and pursued careers in retailing and international business. Michael Leon's work has been labelled by reviewers as science fiction thrillers.

Goodreads: http://www.goodreads.com/author/show/5369984.Michael_Leon
Amazon Author Page: https://www.amazon.com/Michael-Leon/e/B01LNQALBW/ref=ntt_dp_epwbk_0
Buy the book at Amazon for only $0.99!