This post is part of a virtual book tour organized by Goddess Fish Promotions. Alex C Vick will be awarding a $50 Amazon or Barnes and Noble GC to a randomly drawn winner via rafflecopter during the tour. Click on the tour banner to see the other stops on the tour.

The Legacy of Androva: Rules of Magic

Firstly, thank you so much to Judith and Straight from the Library for inviting me to write a guest post for her blog today!

I love reading and writing about magic. It captivates my imagination more than any other subject. On the face of it, magic could be infinite. It has the potential to be anything, to do anything, like a mysterious power that you can’t define or restrict. Yet, in reality, (or rather, in fiction!), there tend to be limits to magic, and rules about how it works. These are great for the reader, because it means that there’s a different kind of magic to discover in every book!

When the Legacy of Androva series begins, there are two worlds: Androva, where everyone is a magician, and Terra (our world), where no-one is a magician. The rules of magic, and how it is used, are challenged more and more as the books progress.

However, at the start, Androva has not changed for centuries. The Code is something that the Androvan Council enforces absolutely, too scared of the potential consequences to risk anything new. With that in mind, here are five pieces of information to introduce the reality that my characters inhabit when Stealing Magic begins.

1. Androvans possess a certain amount of magical energy from birth. It is an inherited trait. But it’s not until their thirteenth year that there is enough energy to ignite a spark of pure magic around which their force field can grow.

2. Having a force field enhances everything, as if the magician has trapped part of a glittering silver sun inside his or her head. It can be projected outwards and filled with spells. It requires no verbal instruction or hand-held accessories, just vision, skill and intent. A great magician can create a complicated spell in the same way that a great Terran artist might paint a masterpiece.

3. Every green living thing has a force field of its own. Tall trees are a powerful source of this living magic, which can be drawn out by any magician and used to enhance his or her ability. Magic-takers from Androva travel to Terra to harvest its living magic, according to the terms of an ancient treaty between both worlds.

4. New spells are not encouraged, and are usually added to the unauthorised list. The magicians that create them risk being punished by the Androvan Council, which is enough to deter most would-be inventors. Despite the lack of new magic, the list of unauthorised spells gets longer every year.

5. Jax and Darius are underage magicians, and magic-takers. They are about to make a forbidden daylight trip to Terra. Shannon, an ordinary teenager, will unexpectedly become a magician when she touches the living magic that Jax is harvesting. The treaty will shatter, and the rules of magic will start to change!

I have visited so many magical places inside the pages of a book, and they each have something unique and wonderful about the rules they follow. Would your favorite be Narnia, Middle Earth or Hogwarts? Or maybe somewhere else?

Thank you for reading, and thank you again to Judith for featuring my post!

Shannon thought there was no such thing as real magic. Until that day. The day that changed everything.

Put yourself in her shoes. Would you open your eyes, if you were the one that heard them? Two magic-takers from another world, arguing about whether they can collect what they came for before you wake up. It sounds like a crazy dream, or a practical joke.

But what if the air around you started to vibrate with an invisible force field? What if, all at once, it felt scary, yet familiar too? You would have no way of knowing that this discovery would set you on a path no-one from our world has taken for centuries. Towards a deadly enemy, and a fight you will almost certainly lose.

All you know is that your heart is beating so fast you're worried they will hear it, and your brain is starting to buzz as the force field reaches it. Would you open your eyes?

Join Jax and Shannon as they live through the most exciting and terrifying ten days of their lives!

Jax reacted first, grabbing Shannon and Darius by the arms and pulling them backwards towards the bookshelves. They ran deep into one of the sections, as far as they could go, not stopping until they reached the end. Staring anxiously at each other, hearts pounding with fear, they waited to hear who had come through the door.

There was no sound at first. Whoever had entered the room had done so with silent footsteps. Then there was an exclamation of discovery, and a man’s voice could be heard calling “Dorian? Can you come in here for a moment?”

Apparently Dorian was the Custodian who had been sitting outside. A short conversation then took place, but the voices were too quiet for Jax, Shannon and Darius to hear what was being discussed. It was soon clear what had happened however.

The same man’s voice was raised to say “You might as well show yourself, I know there is someone in here. And I also know you are not permitted. I can recognise that the Treaty has been read just a few moments ago, but Dorian tells me he has seen no-one gain entry this night.”

There was a pause, and then the voice continued, becoming angrier.

“Come now, this is a waste of my time and yours. I will find you, and you will not enjoy the methods I will use.”

Jax had gone completely white. He recognised the voice as belonging to Marcus. For a few seconds he tried to think frantically of a way that they could escape, but almost straight away he realised that it was impossible. 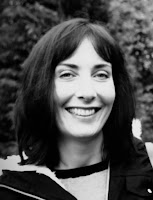 Alex writes contemporary fantasy books for a middle grade audience and older. There are three (self-contained) stories in the Legacy of Androva series so far, with a fourth on the way. You can contact Alex, and find more information about Androva, including a character interview, at http://www.alexcvick.com.

Alex lives in the South of England with her husband and two daughters. When she's not working, or writing about magic, she also loves reading and photography.