For fifteen minutes each night a portal opens in Tamara’s barn and a horde of ghosts spills into her yard. She and Dex work together to find a way to help Cal and the thousands of spirits stuck in the void to cross over. When she learns she has the ghost touch—the ability to touch the ghosts as if they were corporeal—and she accidentally helps a little boy cross, she believes it might be possible. But not all the spirits play nice and when they learn they can sip energy from her ghost touch, they become greedy putting her life at risk.

Each time Cal has to pull her from the mass of ghosts, her touch restores him more and more until he is at danger of being stuck on earth—forever, which is very enticing to Tamara the better she knows him. Will she and Dex figure out how to help the spirits cross and if they do, will she be able to let Cal go?


The knot of ghosts hissed and shrieked as they chased her. Seeing they’d already changed direction, she dug her fingers into the grass to pull herself away from them. Her legs were as shaky as a newborn foal and even crawling was too much effort. Ruff stood next to her, barking, but she knew he’d have no effect. He couldn’t even touch the ghouls.

Then they were on her. Petting and pulling, stroking and grabbing at her arms, legs, clothes, hair. Their chatter became excited, reminding her of a pack of hyenas. She buried her head under her arms wishing…praying they’d go away.

Was that Cal? Tamara raised her head as much as she could, but was still buried in spirits. She got a glance at a familiar face before the writhing group closed in again. Was that the drowned ghost? She looked less bloated.

“Leave her. This will not help. Get away.”

Slowly the weight lifted from her until she felt only one pair of hands grasping her upper arms. Gentle and caring, not demanding.

“Cal,” she croaked, struggling to raise her head and open her eyes.

Her eyelids were so heavy. She couldn’t hold them open. Couldn’t make her neck cooperate so she could look at Cal.

“Tamara, you need to move him. I can’t touch him.”

“Let go of me Cal. You’re making it worse. I think.” Even speaking drained her of energy. It took all she had just to force the words out, but when Cal let go of her, she felt a difference immediately. It was as if her strength no longer leaked out of her extremities. Unfortunately her tank didn’t seem to be refilling very fast. “I…it’s…it’s better. Give me a minute.”

“We don’t really have a minute, Tamara.” 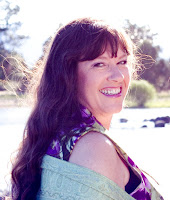 LA Dragoni isn’t too particular about who falls in love or where they fall in love. She simply considers it her job to capture the story about their love. Whether it’s paranormal, mythical, or time travel, LA will be there to divine their story for you. She lives in Central Oregon with her husband and children, but haunts ghost towns and cemeteries up and down the west, in search of the next adventure to sift through her storytelling brain.

Buy the book from Amazon, Barnes and Noble, Kobo, or iBooks.