This post is part of a virtual book tour organized by Goddess Fish Promotions. Ed Lin will be awarding a limited edition print copy of the book to a randomly drawn winner via rafflecopter during the tour. Click on the tour banner to see the other stops on the tour.


What is the favorite book you remember as a child?

Grinny by Nicholas Fisk. It was such a creepy book, the first book that really scared me. I read it back in grade school and then decades later, I recalled the horror of it in a dream. I Googled it and discovered that I wasn’t the only adult haunted by reading it as a kid.

Tell us about your current book in 10 words (not including the title).

Snakes Can’t Run is about chasing something that might be your own tail.

I’m reading The Butcher’s Wife by a Taiwanese writer, Li Ang. It’s a collection of stories and the title novella is about violence unleashed by by years of chauvinism.

I really like myths and legends so I have Tales of the Marvellous and News of the Strange on hold. It’s the English translation from a single and ancient manuscript in a library in Istanbul. I understand that it’s in the tradition of The Arabian Nights.

Many, but my worst may be that once I buy a book, I don’t feel pressured to read it. I have actually borrowed books that I already own in order to give myself a deadline to read before I have to return it to the library!

For books, print works for me because I read news and keep up with social media on my phone and computer. I want to disengage from that aspect of the world when I step into a book.

Neither! I like to remember the page numbers where I left off. If I can’t figure it out eventually, then I’m probably not into the book!

On the train. With all the woes of the New York City subway system, I have had so much unplanned reading time, it’s been great and horrible!

Set in New York City in 1976, Snakes Can't Run finds NYPD detective Robert Chow still haunted by the horrors of his past and relegated to tedious undercover work. When the bodies of two undocumented Chinese men are found under the Brooklyn Bridge underpass, Chow is drawn into the case. Most of the officers in his precinct are concerned with a terrorist group targeting the police, but Chow's investigation puts him on the trail of a ring of ruthless human smugglers who call themselves the snakeheads. As Chow gets closer to solving the murder, dangerous truths about his own family's past begin to emerge. Steeped in retro urban attitude, and ripe with commentary on minorities' roles in American society, this gritty procedural will appeal to fans of George Pelecanos and S.J. Rozan.


The mind is a funny thing. After I got on the wagon and fell in love with a girl, I started seeing my father out in the streets. I didn't literally see his ghost walking around, but I'd see his nose in profile on another guy's face. Sometimes I'd be walking behind someone who had his slouchy shuffle, his spotted ears, or the back of the head that looked like an elderly porcupine with spikes gone soft and white.

One time, a hand reached out to my shoulder and touched me exactly where he used to touch me from his chair after dinner to ask me to get him a beer from the fridge.

Of course it wasn't my father. It was an older guy who wanted to know if I was the guy whose pictures used to be in all the Chinese newspapers. The man was almost completely bald and had two light brown spots on the top right of his head that looked like an imprint from a woman's high-heeled shoe.

He called me the Sheriff of Chinatown. I tried to get away from him as soon as possible, but he was one of those people who liked to say good-bye and then ask another question just when you're about to part. The guy ended up grabbing both of my hands twice before I was able to make the corner and get away. I checked that my wallet was still in my pocket, though, just in case he had been working me with a partner. I guess he was genuinely glad to meet me. 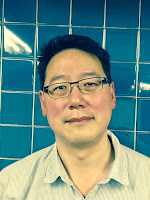 Ed Lin, a native New Yorker of Taiwanese and Chinese descent, is the first author to win three Asian American Literary Awards and is an all-around standup kinda guy. His books include Waylaid and This Is a Bust, both published by Kaya Press in 2002 and 2007, respectively. Snakes Can't Run and One Red Bastard, which both continue the story of Robert Chow set in This Is a Bust, were published by Minotaur Books. His latest book, Ghost Month, a Taipei-based mystery, was published by Soho Crime in July 2014. Lin lives in Brooklyn with his wife, actress Cindy Cheung, and son.

Buy the book at HarperCollins.