This post is part of a virtual book tour organized by Goddess Fish Promotions. Leslie will be awarding $10 Amazon or B/N GC to a randomly drawn winner via rafflecopter during the tour. Click on the tour banner to see the other stops on the tour.


Tell us about your current book in 10 words.

My novel is DEEP SAHARA. Klaus, encountering slaughter in the Sahara, stays to find himself.

I’m reading THE VOICES OF MARRAKESH – A RECORD OF A VISIT by Elias Canetti. In the early ‘70s I lived in Morocco and visited Marrakesh. The descriptions in the book ring absolutely true to me. There is no lush exoticism here. Each episode is perfectly crafted to render some moral, emotional or psychological insight, cast in the framework of an unfamiliar culture.

do you have any bad book habits?

I’m not sure if this counts, but I keep acquiring multiple copies of the same books. Maybe it’s because I’ve travelled a lot and not been rooted to the place where I have my collection of books. So either wanting to finish an unfinished volume, or to re-read something I’d first not been in tune with or easily absorbed, I simply buy another copy. I can'T remember how many copies I must now have of TENDER IS THE NIGHT.

I used to read several books at once. This is because I have always loved bookshops and, like a magpie, whenever I saw a further fascinating book plunged into it before having time to finish the last. More recently, however, I have either become more disciplined, or simply live in a place, Cairo, with less English bookshops, and been able to finish what I’ve started.

I feel guilty to say JUSTINE by Lawrence Durrell. For there are some vivid scenes and much that is poetic. Also I am very interested in the Alexandrian setting for this is the city where I was born an in which I’ve set a novel of my own: SOLOMON’S FOLLY. So I started out with the intention of being an enthusiastic supporter. But I found some of the philosophical passages were badly in need of editing. I suppose that had he been publishing today, where standards in a good publishing house are more rigorous for fiction, such editing would have taken place, toning up the prose but without losing the essence of the ideas. Yet as the book stands it was unnecessarily demanding to read and sometimes steered a wavering path between the precious and pretentious.

My favourite book this year is a Japanese novel, STRANGE WEATHER IN TOKYO by Hiromi Kawakami. A woman in her 30s meets her schoolteacher in their local bar-cum-restaurant and the writer subtly conveys their growing relationship. I enjoyed the way she renders the imperceptibly developing depth of their encounters, weaving in the change of seasons, reflected by the food available, thereby giving a sense of the passage of time. In sum, it is the unpretentious humanity of the book that I valued.

I go to work by car. Since I live in Cairo where it is difficult to drive, as anyone familiar with the traffic here will know, I am fortunate enough to have a driver assigned to me by my employer. This is a one and a half hour journey so this gives me my time to read in the car, 5 mornings a week.

I say mornings but not evenings. I am too tired by then and the light is failing. All I can do is telephone, sleep or pray.

THE LAST TYCOON. This may not be the greatest novel I’ve read. Proust has that distinction. But the power of Fitzgerald’s love scenes, out at Malibu and in the restaurant where they share a late meal, is unsurpassed.

My books tend to be paperbacks nobody would want for their monetary value. But then I live in Cairo among non-English speakers and colleagues in a largely technical institution who wouldn’t think of asking. That apart, however, until recently I wouldn’t give books away anyway since I had an idea of building up a complete novel collection. Yet I don’t have that feeling anymore. I’ve read what I’ve read and if I want to re-read it I can always get another paperback copy.

Klaus Werner travels to the Algerian Sahara to research a book on desert insects. He is billeted in a local monastery, but upon arrival he finds it empty of its inhabitants.He soon discovers that it is a recent crime scene.


I left Rome in the summer of 1980. The day before that, I went to see Father Carlo. He had asked me back for a final visit, although he’d already given me the travel information.

Late for my appointment, I hastened toward the German Catholic Church of Santa Maria dell’Anima, on Vicolo della Pace, not far from Piazza Navona. My mother used to take me there every Sunday during my boyhood. The rector had been German; now, its priests were not necessarily so. Yet even the Italian ones spoke the language, knew the country and were likely to have carried on their ministry in Germany at some point.

That was the case with Father Carlo. He was sitting in his office in the adjoining building. It gave onto the courtyard at the back of the church. The blinds were drawn against the summer afternoon glare when I finally entered.

Recalling the priest now, it’s hard to bring him into focus with all that’s happened since. Even then, I was still feeling the effect of the sedatives I’d been taking.

My wife Anja had died. But what I suffered was not only her loss, but the loss of myself, in a total breakdown.

I’d been in our apartment the week after she died. Staring vacantly at some mirror in the empty bedroom, I winced. Something had just moved in the glass. It was a stranger: me.

Father Carlo was waiting for me at his desk. He sat beneath a framed photograph of what I’d later come to know was the young Pius XII as Apostolic Nuncio to Germany in the 1920s. It was at one of the parties Pacelli – as he then was – threw for the political and diplomatic elite in the Tiergarten quarter of Berlin where he’d lived.

Father Carlo adjusted his monk’s habit over an ample midriff as he shifted in his chair to look up from the desk. But he continued 10 straightening its contents, then the rimless spectacles he was taking me in through.

I was sweating and out of breath. I apologised for being late, but explained that, having sold my car, I had walked all the way there from my apartment.

Mentioning it made me recall its shadowy silence, shuttered, too, against the city’s brilliance and traffic. My possessions were half-packed there – the few I would be taking with me tomorrow. Standing there alone, I had simply looked at the rest and left them to move only later if the owner absolutely demanded it. Anja and I had accumulated so much together.

“You’re not very late,” my spiritual advisor said. (For this was what the monk, now indicating the chair at the other side of the desk, had more or less become for me over the last few weeks, regardless of my lack of religious belief. With Anja’s death I had soon found myself using Carlo as a secular Father Confessor, judging it better to rely on him than on the doctor, who’d been of little help.)

The priest told me how pleased he was that I had finally decided to undertake the publishing project I’d been offered; how personally helpful I was sure to find it; how conducive to work the monastery would prove. These were all things Father Carlo had said several times before, but which he nevertheless chose to repeat now, with this show of paternal concern.

“Look, I’ve written a letter of introduction to the Abbot for you.” Father Carlo passed me one of two envelopes lying on the desk. They were sealed and made of fine paper.

“He’ll make sure you’re well looked after. And then it occurred to me that while you’re here for me to wish you Godspeed, I might as well also send a note with you for another monk, Father Erich. He’s one of the Order’s hermits, in permanent retreat even further south. I hope you’ll meet him too. There’s every reason why you should.”

“They come in when the monastery holds a chapter. And the Abbot will take care of giving him the letter. Or any of the monks should know how to get it to him.”

“I’ll do what I can,” I said. “It’s most important that he should receive it,” Father Carlo said, glasses glinting as he handed over the letter.

Taking it, I could not see beyond the opaque lenses. 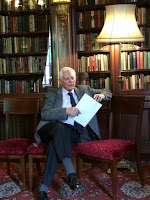 Leslie Croxford is a British author and Senior Vice-President of the British University in Egypt. Born in Alexandria, he obtained a doctorate in History from Cambridge University. He has written one novel, Soloman's Folly (Chatto & Windus), and is completing his third. He and his wife live in Cairo.

Buy the book at Book Depository or Amazon UK.