Straight Browsing from the Library: Edger by David Beem

This post is part of a virtual book tour organized by Goddess Fish Promotions. David Beem will be awarding a $50 Amazon or Barnes and Noble GC to a randomly drawn winner via rafflecopter during the tour. Click on the tour banner to see the other stops on the tour. 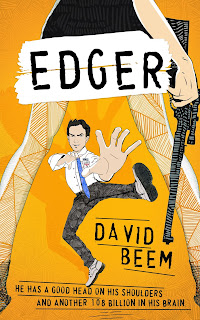 It’s been said every story must start somewhere. Ours begins with a professional dork. The kind who fixes computers and lives in his gran’s basement. The kind tapped by destiny (that saucy minx) to become the world’s first superhero!

And not a moment too soon…

Join our dork of destiny as he channels the collective unconscious—his psychic superpower—in a harrowing tale of high drama, romance, betrayal, revenge, jesus chickens, cocaine, weirdos, magicians, ninjas, nfl spies, and disco ball water torture administered to the tune of rapture, by blondie. My god, man, what does it all mean!?

It means uncorking that next bottle of wine isn’t only a good idea—it’s advisable.

Water and glass shower the dance floor. Needle scratches vinyl. Hattori Hanzo seizes control instinctively and I land with the grace of a ninja. Mary, who has no dead ninja in her head, thuds with the grace of a turkey carcass dropped from the Level Two parapet of Westfield Horton Plaza.

“Kill them!” someone yells.

“Don’t kill them!” I yell back, figuring that’s got to be worth a try.

Shots are fired. Screaming patrons run and duck for cover. A bullet ricochets off the wall. I grab Mary by the ropes binding her, and drag her behind a nearby couch.

I chance a peek. Caleb Montana is near the front door, exchanging shots with two Nostradamus agents hiding behind a life-size statue of Caleb in his quarterback uniform, one arm cocked back, preparing to pass the football, and the other stretched out in front, pointing.

I round on Mary, who flings her wet hair back like a Sports Illustrated swimsuit model. Water sprays my supersuit’s visor.

“Right, right,” I say, feeling around on my utility belt. Jeez, I’ve never tried to locate anything without someone helping me from the Collective Unconscious. There are a lot of things here. I pull a tiny ball out, and the nano-technology grows into a switchblade-shaped object. Seems promising. I flick it on. Blue flame blows out from the end.

“Come on, quit fooling around.”

“Don’t rush me! Do you have any idea how stressful this is?”

“Come on,” she says, her voice husky, cheek to floor, back arched, butt in the air.

“You never see Batman having this problem,” I mutter.

David Beem enjoys superhero movies, taekwondo, and flossing. He lives in Djibouti with his family and crippling self-doubt. Help actualize David’s inner confidence. Visit his website today, and buy all the stuff.