Straight Browsing from the Library: The Speaker by Andi O'Connor

This post is part of a virtual book tour organized by Goddess Fish Promotions. Andi will be awarding a $20 Amazon or B/N GC to a randomly drawn winner via rafflecopter during the tour. Click on the tour banner to see the other stops on the tour. 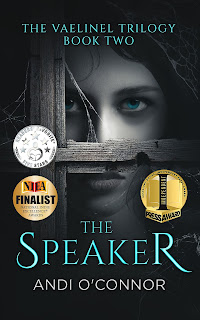 The Vaelinel Trilogy continues with this absorbing sequel to Silevethiel! Alone and hunted by the Drulaack, Irewen takes advantage of her only option for survival. Pushing her concerns aside, she lets the dead keep her.

But her refuge doesn't last long. Driven out of their hosts by Laegon, a handful Drulaack have returned to the Spirit World. No longer having the protection of the dead, Irewen is forced to return to Vaelinel.

Finally reunited with her companions, the burdens placed on them are taking their toll. Thoughts of suicide and mistrust plague the company. Slowly unravelling, they must conquer their personal battles before standing against the evil threatening the land.

For the Corrupter thirsts for revenge. And he'll stop at nothing to satisfy his hunger.

Holding her head in her hands, Irewen screamed, trying to break free. But her mother wouldn’t let her. The images kept coming, driving away every last shred of doubt.

She knew what she had to do. She had no choice but to accept the protection of the dead.

Irewen clenched teeth, desperately wanting the horrid stream of visions to end. “I give in. You’ve made your point. I accept your aid.”

Letting her hands drop to her side, Irewen breathed a sigh of relief when the images vanished. Her parents didn’t waste any time. The violet mist surrounding both of them wafted forward.

Irewen gasped, unable to control her fear. The purple cloud enshrouded her, sending an icy chill over her body the moment it touched her skin. Finally, she understood its purpose. The mist served as a gateway for one to materialize outside of the many. Subsequently, it was what would assimilate her into the community of the dead.

She opened her mouth to cry out, but no sound came. Instead, the mist seeped into her lungs, driving the piercing iciness throughout her entire body. She couldn’t breathe. Panic took hold. She grabbed her throat as if such a simple act would bring air back into her lungs.

Her father’s advice somehow broke through her hysteria. Dropping her hands to her sides, she concentrated on letting her muscles relax. Immediately, the discomfort lessened. But she didn’t breathe. Not normally. The mist took the place of air. Yet, it somehow fulfilled her needs.

The spirits of the dead flowed into her body, intertwining their memories with her own until she could no longer distinguish one from the other. The flood of their emotions overwhelmed her. Their frustrations. Their sorrow. Their remorse. Their anger.

The intensity was far greater than anything she’d thought possible. Contrary to what she’d believed, the dead’s emotions didn’t dwindle over time. They festered. The ferocity was indescribable.

Her knees gave way, but she didn’t fall to the ground. The mist supported her, holding her aloft. Like a mother cradling an infant, it lifted her and pulled her closer. The world began to spin. She heard her father’s voice rise above the deafening whir of the dead, but she couldn’t make out the words.

The drawing sensation increased, tugging her closer to her parents. Suddenly, the iciness vanished from her body. She felt warm—cozy. Weightless, as if she was floating in her mother’s womb. The intensity of the dead’s emotions lessened, becoming part of her as she became part of them. She shared in their frustration. Their sorrow. Their anger. And they shared in hers. She was one. But many.

She belonged. She was home. And she never wanted to leave. 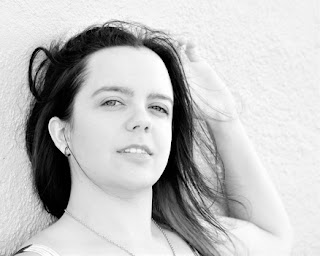 Andi O'Connor is the award-winning author of The Dragonath Chronicles, The Vaelinel Trilogy, and The Legacy of Ilvania. Her critically acclaimed novel, Silevethiel, is the 2015 Best Indie Book Award winner for Science Fiction/Fantasy and the 2015 New Apple Official Selection for Young Adult. Silevethiel was also named to Kirkus Reviews' Best Books of 2013. The Speaker is the 2018 Independent Press Award Winner for Fantasy and a Finalist in the 11th Annual National Indie Excellence Awards. Andi’s novel, Awakening, is a 2018 Independent Press Award Distinguished Favorite for Fantasy.

You can frequently find Andi as an exhibitor and guest panelist at Comic Cons throughout the country including the Rhode Island Comic Con, Awesome Con, Philcon, Conclave, WizardWorld, and Chessiecon. You can connect with Andi on Facebook, Twitter, and Instagram. For more information, visit Andi’s website.