Straight Browsing from the Library: Until We are Free by TM Blayte

This post is part of a virtual book tour organized by Goddess Fish Promotions. TM Blayte will be awarding a $10 Amazon or B/N GC to a randomly drawn winner via rafflecopter during the tour. Click on the tour banner to see the other stops on the tour. 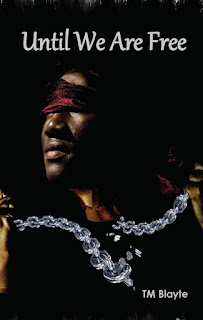 Nyl Jayms is tasked with kidnaping the Elder princess, to force her brother, the king, to negotiate with humans. The alternative is a war that could lead to the annihilation of both humans and Elders.

A Rider Council faction, led by Nyl’s father, is opposed to any negotiations. They will do anything, including sabotaging his assignment, to trigger a war.

Nyl and his team have to outsmart the king’s elite Royal Guard, to get to the princess, and somehow stay one step ahead of the faction opposed to negotiations. Everyone will be forced to re-evaluate ideology they were raised with, as an impending war looms ever closer.

Join these elite teenage rebel warriors on a journey of war, betrayal, and political scheming, in Until We Are Free. In this debut novel from TM Blayte, faces of friends, family, allies and enemies will blur. Loyalties will be tested, until the determination to be free becomes the only thing that matters. After all, does one person’s freedom mean another person’s oppression?”


As a member of a family whose head can be targeted by different kinds of psychos, you get used to awkward things happening. Since it is not yet clear who attacked the parliament, all council members and their families are to stay safe and guarded. I was not surprised for instance, when one day a small army of guard’s, that I am sure are not government or Rider, arrived to guard our house. I was not surprised when every now and then, the guards practiced drills and fired random shots at dodgy looking people near the house, only to find out they were civilians passing by. So far, they'd managed to track down sixteen potential attackers headed to our house. Number of suspects injured by the guards: eight. Number killed or died as a result of injuries inflicted by the guard: five. Number of actual persons who turned out to be attackers: zero. So, one can easily guess, I'm not really confident about them.

Maybe that is why when a loud explosion comes from the gate one Tuesday morning, neither Dad, Mom, nor I, are concerned.

“I do wish they would stop that,” Mom says, “it makes me nervous.”

“Necessary measures,” Dad soothes, “until we apprehend the traitors in our midst, we cannot be too careful.”

It is the first-time Dad has said a word concerning the events at parliament a week ago. I take advantage of the topic being brought up.

“Of course, Nyl. True enough, the attackers at parliament were masked, but they couldn't have killed as many of our security as they did. How can four men, without any special weapon I might add, kill almost thirty people? It was someone the guards trusted.”

I shake my head as another explosion sounds outside, “But why would our own people do that?”

“Power. Power, the great poison of love. People will do anything for it. Remember not many weeks ago, I told you about factionalism among council members? That attack was evidence of what I told you.”


Aspiring journalist by day, reader by night, and author somewhere in between, TM Blayte is the author of Until We Are Free. He is published by Alban Lake Publishing. He is also the author of short works such as: Till Death Do Us Part, The Last Children, and The Power of Legend.

Until We Are Free can now be bought from:

Physical book: https://www.infiniterealmsbookstore.com/product-page/until-we-are-free-by-tm-blayte
eBook: https://www.infiniterealmsbookstore.com/product-page/until-we-are-free-by-tm-blayte-1
The Power of Legend is available for free reading on T’s blog at https://www.tmblaytespeaks.wordpress.com/
T’s biggest dream is to … Nah, it’s personal!
Follow him on Twitter at http://www.twitter.com/tmblayte
To hear more about T’s work, and receive exclusive content, subscribe to his free newsletter. https://docs.google.com/forms/d/e/1FAIpQLSeDnT36u5d62e0CwQhWLyW2NAjL5NE6UvLnBZPD_qlXCeOiqg/viewform?c=0&w=1&usp=mail_form_link