This post is part of a virtual book tour organized by Goddess Fish Promotions. Emma Cyrus will be awarding a $25 Amazon/BN GC to a randomly drawn winner via rafflecopter during the tour. Click on the tour banner to see the other stops on the tour.

Can you tell us about yourself, your background etc.?

The last time I wrote fiction (before Life Without Shoes) was in high school with embarrassing results. My English teacher published a short story and a poem in the school literary magazine without telling me. I got teased mercilessly by the other kids because both writings were too revealing. The poem was especially humiliating because it was a poorly disguised love poem about my next-door neighbor. I’m surprised I had the guts to go back into school.

For many decades, I wrote non-fiction extensively—first in academia through college and graduate school. Then, I had a small consulting business, where I wrote training materials, video scripts, government-funded publications and the like. After I sold that business, I worked in various kinds of management for startups and small businesses. In marketing, I wrote marketing plans, ad copy and requests for proposal. In finance, I wrote business plans, financial analyses and projections. In human resources, it was performance evaluations, recommendations and employee handbooks. The businesses themselves covered the waterfront from engineering to art supplies to commercial baking.

It wasn’t a straightforward career path, but I think the variety gave me exposure to lots of environments and different kinds of people from factory workers and retail clerks to accountants, lawyers and executives. I learned to communicate in the language that each felt at home in, which gave me a good range of vocabulary and styles.

What is the story behind the story?

I’ve been fortunate to have been part of two vibrant spiritual communities during my life. The first came into my life shortly after a painful divorce. A friend of mine handed me copies of Horoscope Magazine and The Daily Word on my birthday. I started studying metaphysics like a madwoman, and I think it helped me drag myself out of a pit. Through that study I came in contact with a teacher of metaphysical science in a non-residential church-like setting, where I studied for twelve years.

Then, I had the opportunity to move to a new state and join a yoga and meditation community in a residential ashram. I was in residence for fifteen years and have been a ‘commuter’ for almost six. I’ve been a yoga and meditation teacher, as well as a teacher trainer. Both experiences together have given me an in-depth feeling for life inside those worlds. I like to say that if I could completely read and practice everything on my bookshelves, I’d be enlightened.

The world of Life Without Shoes isn’t really like either one of my personal experiences, but I created it out of my familiarity with and belief in the power of spiritual community. I also understand the tension that arises between living in a spiritual or religious mindset and, at the same time, functioning in the material world of conflict, stress and competition. Father Ambrose and his co-retreatants at New Life are always dealing with ‘life inside the gates’ and ‘life outside the gates.’

Did you always know how the story would end?

No, actually I had no idea. I had started in-depth work on Life Without Shoes while I was taking Mystery II at Gotham Writers Workshop. One of our later assignments was to write the last chapter for our book. I was staring out at an abyss, because the ending hadn’t been revealed to me yet. I wasn’t sure if I could pull off the neat, tidy ending typical of cozy mysteries. I wrote my instructor and asked what I should do. He said I wasn’t held to it; I should just establish an endpoint so that writing the rest of the book had a direction to it. I found when I got nearer the end, I saw how I could go toward a couple different endings. The one I chose seemed more ‘right.’

Do you have any more projects in the works?

I’m currently at work on the second book in the Father Ambrose series. Right now, my intention is to write five books in that series. I’ve been studying the works of Ann Cleeves and have noticed that her series are kept to a limited run. It’s a very interesting way to conceive of the life of the series ‘hero.’ Then, what is possible for the writer is a self-contained growth arc for that character. There’s a beginning, middle and end to the overall time we spend exploring that character’s inner and outer changes.

I also think it’s probably about this time that writers start contemplating other heroes and settings, other themes. If I decide to start another series, I probably will choose a woman as protagonist—it offers a different range of possibilities even if I choose to stay within the world of spiritual life. 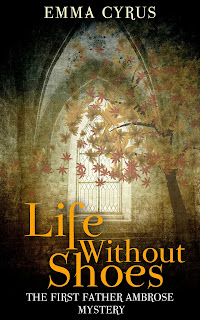 In the great tradition of The Name of the Rose, the Brother Cadfael mysteries and Grantchester, Life Without Shoes confronts a modern-day monastic with a horrifying crime.

Father Ambrose has found a simple life leading a spiritual community in Northern California. He spends his days on guiding the farming and teaching meditation. Then, someone dumps a body in one of their orchards.

Now, the violence of the modern world has come crashing through the gates. He wants Sheriff Charlie Cormley to believe the body has nothing to do with them, but it’s not that easy. He must take on the role of sleuth to protect his community and find the truth. He finds himself moving out into the world in ways he never imagined, and life at New Life will never be the same.

“Please have a seat,” Cormley said. “You visited with Redmond after we saw you. How’d that go?”

“Well, probably not the way you’d like. He gave me more information, but he asked me not to share it with you.”

Gus slammed his palm on the table just as Ruth was putting down bowls of ice cream. The bowls sloshed and she jumped back, startled. “I’m sorry, Ruth. I’m just frustrated. Not with you. Not with this fantastic-looking treat. Just how this guy is jerking us around.”

For a moment, there was quiet. Is he talking about me or Redmond? Ambrose wondered.

“Gus...” the sheriff started. This was one of the reasons he tried to protect his wife. Tempers could flare in the department in a difficult case. He never wanted her to bear the brunt, even unintentionally. But, of course, she wasn’t naïve or thin-skinned.

“Detective, I appreciate this is a tough one. But, please, not at my table,” she said quietly but with firmness.

“I do apologize, Ruth. And to both of you,” Gus said, looking across the table at Cormley and Ambrose. “Totally uncalled-for. Please, Father. Continue.”

Ambrose nodded. “I think I can give you the big picture without breaking my promise to Redmond. His lawyer should be motivated to cooperate with you on looking at Golden. In a nutshell, there’s supposedly a financial connection between Redmond and Golden. Golden used that to get Redmond involved. The killing was unintentional. Golden definitely has a role.”

“That’s it? That’s all you can say?” Gus asked, still agitated.

Emma was born in West Virginia and lived there until she was in high school, when her family moved to Pittsburgh. After high school, she went to Boston to go to college. She worked in different small and startup businesses until she moved into a yoga community in Pennsylvania. There, she’s worked on various projects and taught yoga.

She started the Father Ambrose series as a way of pulling together her love of good mystery stories with her deepening appreciation of the real-life magic and mystery of inner work. Father Ambrose has many characteristics in common with the leaders of her community, but his voice is probably hers, or at least what she thinks her voice would be, if she were living inside the parameters of his life.

She’s discovering the compelling nature of writing fiction and the surprises of working with what other writers have called their ‘muse.’ The creative process seems to have its own timetable and logic. The best results seem to come from stilling her own personal voice and allowing that ‘muse’ to speak.