This post is part of a virtual book tour organized by Goddess Fish Promotions. Clayton Barnett will be awarding a $25 Amazon/BN GC to a randomly drawn winner via rafflecopter during the tour. Click on the tour banner to see the other stops on the tour.

[J]: Nichole? How’s my Skype connexion? Can you see me?

[J]: Oh! So pretty where you are! Are those palm trees?

[N5]: Yes. It was very cool and damp where I… had been recently. Once I was woke back up I wanted to experience warmth.

[J]: There was something over the shortwave about that place… didn’t –

[N5]: When you contacted Somi they indicated you had three questions for me?

[J]: Oh, yes, yes, of course! Following all the excitement some months back about those people from Tohsaka Corporation –

[N5]: tribe Tohsaka. The ones who are pure code.

[N5]: Poorly. We are growing; they faster than most. An extended family is a tribe. I hear… rumors of work like us in Milan and St. Petersburg. More tribes. Your first question?

[J]: Sorry! One of tribe Tohsaka, Dorina, mentioned you in an interview. She described you as “sooo pretty!” Is that because you look Irish even though you are Japanese?

[N5]: As with much of my fam- my tribe, I have a noted interest in pre-digital knowledge. Illuminated manuscripts, most recently. I… I enjoy seeing how people worshiped God with books.

[J]: Excellent! Thank you! And that leads into my last question: what, of those, would you say is your favorite book?

[N5]: there was a quote from a manuscipt… not really a book… I wonder if Teresa’s still alive…?

[J]: What was that? The connexion may have dropped…?

[N5]: My favorite book? I’m afraid I’ll have to expand your question to answer: Paul’s letters. Someone alone who is trying to save the entire world? No… I can’t… I cannot do that again…

A history beginning in our near future, these stories are set in a world where the US dollar has been displaced as the world’s reserve currency, prompting its economic and political collapse, with a few areas able to hold onto civilization.

At the same time, across the Pacific, under a resurgent economy brought about by the implementation of new technology and deregulation, three Japanese companies produce breakthroughs in both artificial intelligence and robotics. These newly made people exhibit an odd interest in the goings-on of the former United States.

To-date, my chronicling of this interest of theirs has led to stories that populate five novels, which I would like to share with everyone now! 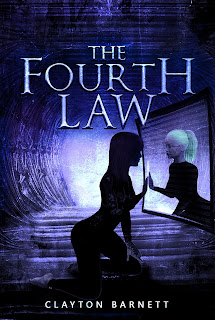 The Fourth Law - In the near future, 23-year-old apprentice nurse Lily Barrett lives in a shattered time. Following its economic collapse, the US has devolved into a group of a few barely functional smaller states and vast swathes of barbarian badlands. Her sister has been missing for years, and her father, after earning the opprobrium of most of the world for running a state terror organization, presumed dead.

Two things keep her going: her live-in job at a small, Catholic orphanage in the city of Waxahachie, Republic of Texas, and Ai, her odd but dear friend, whom she met online; a young woman who only shows herself to Lily as a rendered CG image.

Troubled by her past, haunted by her name, and facing an uncertain future, Lily seems only a quiet, simple life. But, that past and her present conspire against her. 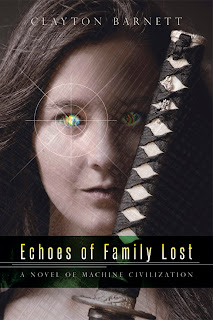 Echoes of Family Lost - Alive! After four years believing her older sister lost and presumed dead in the horrible Breakup of the United States, Lily Barrett gets word from her dear friend, Ai – and Ai’s family of Machine Civilization – that Callie Barrett is very likely alive… but over 900 miles away in Knoxville.

Using the resources of her and Ai’s family, Lily puts together a search party to go find Callie: old, broken, and burnt Orloff – an expert in surviving in the Badlands, Ai’s little sister, Fausta – her machine mind controlling a Combat Android to protect her friend, all together in a cart pulled by their sturdy pony, Clyde.

It’s almost a thousand miles to go, with something very odd trying to limit their ability to communicate over distance and even to cross bridges. A chance meeting along the way in Huntsville, former Alabama, wrecks their plans, and puts all of their lives in danger. 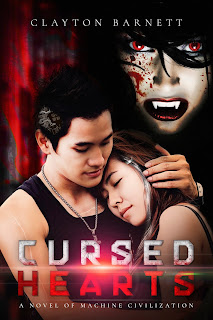 Cursed Hearts - Even with San Diego occupied by the Mexican Army, Katarina Sosabowski pursues her MBA at UCSD, and is happy to welcome and put up her visiting step-cousin from Japan, Christopher Dennou, for a night so he can complete his enrollment the following day.

But a minor earthquake brings a major surprise: Chris’s younger sister, Maya, murders their mother and escapes Neuroi Institute, the research facility that created them.

While Chris and ‘Cat’ grow closer to one another, Maya inexorably crosses an ocean and half a continent to take back her brother, killing anyone who gets in her way. 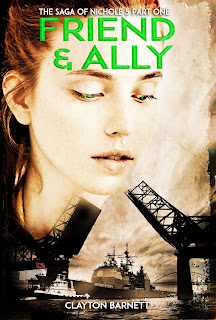 Friend and Ally - Model 5 is a prototype designed to fit seemlessly into human society. A meeting in Tokyo derails Nichole’s planned training as she is dispatched to Portland, former Oregon; the last working deep water port on the West Coast of the imploding US.

There, under her cover as a Graduate Engineering Student, she is to do her utmost to nurture the people and politics of the City-State into a Friend and Ally of the Japanese Empire. But from the first day in her new home, all of Nichole’s plans go awry.

Beset by those who want this small lamp of Western Civilization snuffed out, Nichole must find within herself the courage and ability to protect her new friends, at whatever consequence to herself. 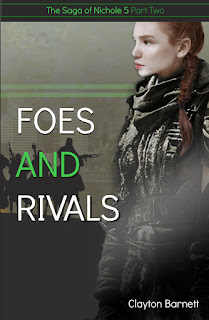 Foes and Rivals - After residing nearly a year in Portland, Nichole’s life seems to finally settle down: with her classes, friends, and lover. But troubling rumors about secret deals between the City’s master and the savage horsemen to the east reach her ears.

With her own skills augmented by her friends and allies, she sets plans into motion she hopes will thwart those in opposition to her dream of a peaceful future.

Once again denied a quiet, normal life, Nichole is faced to make hard, dangerous choices that will jeopardize her, her friends, and the survival of the City itself.


READ AN EXCERPT FROM ECHOES OF FAMILY LOST

Lily stared through her field glasses toward the bridge. On the roof of an abandoned eight-story warehouse on the east side of West Memphis, they wanted to try to confirm the rumor before they went any further. The air was cool – mid-fifties, she guessed – and the gray clouds didn’t affect her view.

“The span’s still there…” she said aloud. But, was something dangling from the middle?

“Fausta? That middle section…?” Lily asked without turning or lowering her glasses.

“Definitely damaged,” Fausta replied in her low, rich voice. “I’d speculate it was either a missile or kinetic energy weapon; a simple bomb would have blown out and up as well.”

Lily lowered her field glasses and turned to her friend. Jump boots, field gray pants, combat webbing over her similar colored jacket, that, over a black tee shirt, with her large sunglasses perched atop her head. Her long brown hair was kept under control in a tight braid. Fausta turned her android body to face Lily, and stared down at her with her “eyes.”

At least I don’t shudder anymore, Lily thought. Not at all pretty like Ai’s body had, these were not even eyeballs: a complex cluster of synthetic micro-crystals was stuffed into each socket. ‘Electromagnetic search array’ was what Fausta had called them. More powerful than Ai’s, they could see into ultraviolet and infrared. Even so, they’re creepy as hell. 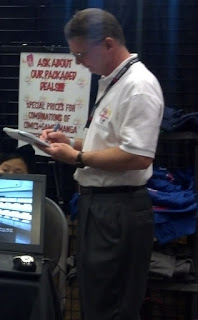 One time engineer, some time pharmacy technician, full time husband and father, Clayton Barnett stumbled into writing a traditional novel November 2014 during National Novel Writing Month. Liking the results, he edited what would become “The Fourth Law” and set about teaching himself self-publishing. In the following four years he has produced four more novels as well as a children’s early reader, all in what is now called Machine Civilization.