Straight from the Library: Texas Splendor by Bobbi Smith

This post is part of a virtual book tour organized by Goddess Fish Promotions. Bobbi Smith will be awarding a $10 Amazon or B/N GC to a randomly drawn winner via rafflecopter during the tour. Click on the tour banner to see the other stops on the tour. 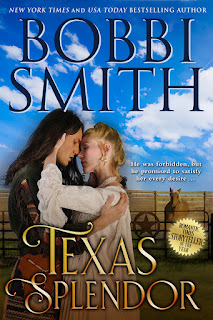 Though an Easterner born and bred, Trista Sinclair fell in love with the rugged Texas terrain the moment she arrived to join her fiancé. But the warnings she heard around the ranch about the dangers awaiting her in the wild terrain of Texas come to life when she is captured while out riding by a blue-eyed Comanche warrior...a man whose sensual touch is far more dangerous than his brute strength.

But Wanted Her Heart And Soul. . .

Lance Barrett has never been tempted to take a captive until he sees a beautiful woman with hair like spun gold taming a magnificent stallion. Trista Sinclair is his half-brother's fiancé, and the perfect means of revenge against the white father who rejected him. Yet what Lance wants most is the one thing Trista swears never to give--her willing surrender. Torn between the life each has known and a desire neither can resist, only together can they claim a love as vast and wild as the West itself...

Lance was closing in fast on the golden stallion. His heartbeat quickened at the prospect of finally attaining the prize. The golden one would be his.

It was then that Trista came into Lance’s line of vision. Lance glanced back, wondering if others were with her, and he was relieved to find she was alone. The last thing he wanted was a confrontation with any whites. Right now, only the golden one mattered.

Trista grew even more excited as she closed in on the wild stallion. She rose up and threw her rope, but just then Lance charged past her. Shocked at seeing the warrior, she dropped the rope and reined in, but her faithful mount stumbled and she was thrown.

Lance captured the golden one and, after tying the stallion up, went back to search for the woman. He had no idea if she was armed, so he moved slowly and silently. He came upon Trista just as she managed to sit up. She looked up at him, and he felt a sudden unexpected jolt of recognition. The woman was none other than the beautiful female he’d seen from a distance at his father’s house the night before.

Terror filled Trista as she stared up at the warrior. She saw only sun-bronzed nakedness and streaks of red and black paint slashed across his face. She had heard of the horror of Comanche raids and knew she had to act. There was no time to think. In a lightning move, she grabbed a handful of the sandy soil and threw it in the warrior’s face, and then ran.

Lance had not been expecting her attack. Angered, yet respecting her daring, he wiped the grit from his eyes and started after her.

Trista rushed down the hillside, but lost her footing and tumbled to the bottom, crashing against a bolder. Excruciating pain wracked her, but she staggered to her feet, clutching her side. A pebble fell, and she looked up. Her eyes widened as she saw the warrior silently standing atop the hill, his arms folded across the powerful width of his chest. She forced herself to keep moving.

She managed only a few tortured steps before it was over. He grabbed her and held her pinned against him in submission. Terror filled her, but she fought to keep her fear from showing. Someone had told her the Comanche respected only strength, so she bravely raised her eyes to meet his. It was then she discovered the startling color of her captor’s eyes – his gaze was a riveting, vivid blue. She tried to fight, but his hands were unyielding cuffs of steel.

Lance was unaware of the mercilessness of his grip as he stared down at her. He saw the ring she wore on her left hand that bore the insignia of the Barrett brand. He wondered coldly at her connection to the Royal Diamond and the Barretts.