Straight Browsing from the Library: Racing Peril by January Bain

This post is part of a virtual book tour organized by Goddess Fish Promotions. January Bain will be awarding a $25 Amazon or Barnes and Noble GC to a randomly drawn winner via rafflecopter during the tour. Click on the tour banner to see the other stops on the tour. 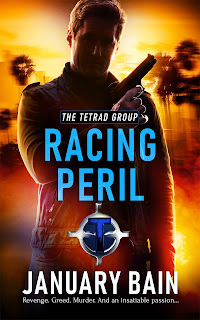 Silk O’Connor resolves to take justice into her own hands on the steps of an LA courthouse. The scumbag who killed her sister is holding a press conference, set free by a corrupt justice system bought off by his rich father. Inconceivable. There is no way she will just let him walk away.

Jake Marshall is a decorated war hero on leave, filling in for a friend at Sterling Security—and protecting the very man who used his car as a weapon and murdered Silk’s only family. The war has left him with PTSD, fighting to salvage his own sanity, and a sniper is the last thing he needs.

The two clash when Jake finds Silk preparing to mete out her own frontier-style brand of justice from the courthouse roof…and the adrenaline-fueled high-stakes world of sex trafficking it ensnares the pair in tests them to their absolute limit.

And when Silk enters this den of depravity, she knows only one thing for certain, she may never come out alive.

What others are saying about Racing Peril.

From the editor, Rebecca Fairfax: “I love the unique ‘Januaryness’ January Bain brings to her writing. It’s a blend of her immense imagination, her fully rounded characters, her well-researched stories, the fast pace she tells them at and it’s all wrapped up in her love for what she does and sprinkled right through with her Canadianism. You can’t go wrong with one of her books, whether it’s the fun, sexy romps of her Brass Ringers series or the high-octane blast of this romantic suspense series. Just read Racing Peril and you’ll be rushing for book two, Racing the Tide!”

January Bain is an extraordinary author who has great talent in capturing the story and creating memorable characters. Romantic suspense is not easy to write. You must create characters who are vibrant and electric, make sure neither the romance nor the suspense overshadow each other, and craft a story that keeps the reader on edge from beginning to end. January Bain has done just that with RACING PERIL. It is one of my personal favorites and I know it will be one of yours, too. Thank you, January, for writing such an excellent story. This is a real treat for readers. I hope there are more like this to follow. - Desiree Holt, USA Today and Amazon bestselling author

“What the hell do you think you’re doing? Get off me!” she screamed in instant pain. Both mental and physical. She had failed. The worst possible outcome.

“Is anything broken?” a strong male voice asked, the low timbre of the tone vibrating through her.

“Who the fuck cares!” she screamed, attempting to push him off along with the rifle she still clutched. He pulled it from her hands, checking that the safety was reengaged, and laying it aside.

Instead of letting her up, he rolled her over and straddled her hips. He grasped her hands as she flailed about, striking out at him, wanting to cause him pain. Tears began rolling down her cheeks. A sob escaped from her chest, loud, as all the terrible anguish that had built up since the accident broke free, a tidal wave of emotion born of pain and loss.

He held her steady as the tsunami flooded through her, a force far beyond her control in charge. Unavoidable. Unstoppable. It pushed her heart to release its crushing burden. The pain of the accident. Images of her sister in her coffin at the funeral. The pitifully small number of mourners to say goodbye to a young life cut so tragically short. The first clod of earth hitting the top of her casket—all the heart-bruising moments locked in her brain of the past few weeks, fucking her up. Then the images came from further back. Happier memories of her and Ashley in simpler times. Watching a movie together. Playing a favorite video game. Cooking up a feast to celebrate one of their birthdays. And her sister’s favorite—shoe shopping. All the record of her sister she would have to last a lifetime.

Her loud sobs eventually turned into soft hiccups. A catharsis born of the trauma and guilt she could no longer escape left her fighting exhaustion, yet strangely eased, some of the overwhelming tension that had driven her for weeks gone. Her other senses rushed in to fill the void. She became aware. Too aware. I think I've wished on every falling star, every blown-out birthday candle, and every coin thrown in a fountain to be a storyteller. And I know where it all began! I was blessed by being read to by my mom every night at bedtime. :-) I love spending hundreds of hours researching the unusual and the mundane to create books that feature strong, kickass women, hot complicated men who aren’t afraid to take risks, and wild adventures full of twists and turns.

You can find me hard at work every morning without fail in my office with a furry baby trying to prove she does a better job of guarding the universe than anyone.

I enjoy talking books, so please connect on Facebook!