Straight Browsing from the Library: Mimadamos by Chadi B. Ghaith

This post is part of a virtual book tour organized by Goddess Fish Promotions. Chadi Ghaith will be awarding a copy of Mimadamos: The Eden of Choice, (US only) to a randomly drawn winner via rafflecopter during the tour. Click on the tour banner to see the other stops on the tour. 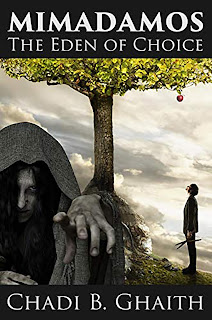 Lebanese author Chadi B. Ghaith brings beliefs that were held in secrecy for a thousand years to awareness in Mimadamos: The Eden of Choice (Fifthscience Inc., July 5, 2017). Ghaith’s book revolves around an ancient triangle of the most significant characters on earth, paralleled by three of the most significant forces in life, and their combined story in space and time. Journey through this fable and explore the ideas that have mystified mankind for centuries: good and evil, heaven and hell, the beginning and end of the world.

Did the ending precede the beginning? Are we only here on earth to comprehend its machinations? Is there room for choice to shape our destiny in the wake of fate and its brutal logic? Mimadamos is a unique, philosophically-rich fantasy which journeys through the depths of conflict and harmony that we understand as the spirit. It decodes the magic of the most ancient scripts known to man, the symbolic fall from Eden and the long anticipated armageddon, revealing a logic so unique that it brings history to its conclusive end.

As the door closed each night, dimming the light from the hall to a narrow beam, Destiny’s heart would flutter a staccato beat. She would clutch the blankets, drawing them up to her ears and nose, and shiver. Eventually the hour grew late, her wide eyes grew heavy, and her sister’s regular, slow breathing lulled her into slumber as well.

Her mother’s smiling face greeted her dream self, leading her on a path through the garden to the small pond where fish glided beneath the ripples. “See the fish?” her mother said.

“Look at the gold one! Do you want to touch it, Destiny?”

A much younger Destiny leaned across the edge of the pond toward the fish. She touched the cool water.

“Do you want to hold the fish?”

The creature swam nearer; Destiny scooped the fish from below with one hand, a trick her father had taught her. She laughed as the fish flopped, mouth gaping, slippery in her pudgy child hands.

Destiny frowned and looked to see whether Mother was serious.

“Squeeze it until it dies in your hands. It has not the rights of life that you and I have. It is just a fish. Don’t be stupid, girl.”

Destiny shook her head, the fish wiggling free to fall with a plop into the pond. As she stared at her mother, the woman’s features melted into those of a woman Destiny didn’t know.

The strange woman sneered at Destiny, her face melting again and growing dark with hair, the teeth elongating and yellowing. The eyes glowed red, and the person grew larger than her father.

Her sister kicked her under the covers, startling her from the nightmare. Destiny’s heart raced, her body drenched in sweat.

“Wake up,” her sister grumbled, turning over to face the other way.

CHADI B. GHAITH has spent many years introducing an ancient mind science called Fifthscience to the public; Mimadamos is his first attempt at translating the magic of Fifthscience into a modern narrative. He is a native of Lebanon; however, he acquired his high school and university levels in Texas. Ghaith studied Arts and Film at Southern Methodist University in Dallas. He now lives in Beirut with his wife and three children.