Straight Browsing from the Library: Astraeus by Haley Cavanagh

This post is part of a virtual book tour organized by Goddess Fish Promotions to celebrate the release of the audio version of ASTRAEUS. Haley Cavanagh will be awarding a $10 Amazon or B/N GC to a randomly drawn winner via rafflecopter during the tour. Click on the tour banner to see the other stops on the tour. 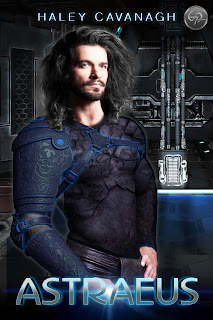 One pre-apocalyptic Earth. One desperate space mission to find a solution. One unexpected alien.

When Dr. Sakota Thorell signed onto the mission to scout out a new, habitable planet, she knew discovering extraterrestrial life was always a possibility. But she never expected to find an alien adrift in space, nor for that alien to be so intriguing. Sakota feels an instant and undeniable attraction to Astraeus, but he represents a million possibilities, and just as many threats.

There are others hunting Astraeus, and his rescue may cost Earth its last hope.

She moved to pull away, but the man’s fingers closed over her wrist.

“Let me go.” She jerked her arm, but he wouldn’t release his grip. She gave him a cautionary look, and he loosened his fingers, though he still held her. Warning bells went off. What if he’s not here in peace? But his eyes sparkled impishly. He seemed to enjoy her skin pressed against his. Maybe he hadn’t been touched in a while. Or maybe he had a crush. Who knew.

Before she could extricate herself, the intercom chimed. “Sakota, are you okay?”

The man’s forefinger trailed along her arm again. She sucked in a breath and shut her eyes as a series of images flashed through her mind. A high wall made of stacked stones. A hand spread out to touch the tips of tall, golden wheat of a field. Multihued buildings in the distance under a purple sky. Children’s laughter and then screams. She jerked when the images changed. Strange rain, like metal. Black ships attacking from the sky, horrible screams which rent the air, death. A gentle brush against her hand again. She inhaled and opened her eyes. The man searched her, calm and patient. She struggled to see straight, but her mind spun.

The isolation walls shot up. Rutledge burst into the room and advanced like an angry bear, brutish, immaculate, and combat ready in his black Oceanstone fatigues. “Let her go,” he snarled.

Rutledge yanked the man’s hand off her and pushed her aside. She fell to the floor on her back in a dizzy haze, reeling from the vision. She turned her head. The man bellowed and tore loose from his restraints. His and Rutledge’s images faded into one as they collided and fought. Rutledge’s weapon whirred as he strained to activate it. The rifle propelled over her head and hit the wall.

“Stop.” Her pleas fell on deaf ears. She closed her eyes.

The men barged into the room with heavy footfalls and angry shouts. She opened her eyes, but her vision swirled. The blurred image of the alien lifted Rutledge’s lieutenant like a kitchen chair and catapulted him in the same direction as the weapon. “Stop,” she hollered to the men. “Don’t shoot him. He wasn’t attacking me.”

Another soldier fell to the floor with a sick thud, holding his stomach. “Yeah? Well, he’s attacking me.”

The alien pounced over her, crouching low. He caged her with his body and made a guttural rumble in his throat, a warning to the men. She turned her head to the marines, who zeroed their weapons in on them. 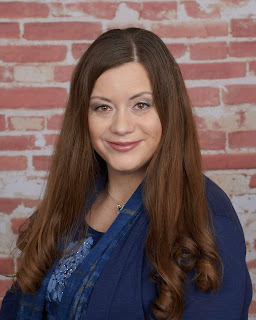 Haley Cavanagh is a military veteran, wife, and mother. She is an alumna of Columbia College, a musical theater nut, and she loves to dive into any book that crosses her path. Haley resides with her family in the United States and enjoys spending time with her husband and children when she’s not writing. She loves to hear from her readers, and encourages you to contact her via her website and social media.

The audio book for Astraeus is live!