This post is part of a virtual book tour organized by Goddess Fish Promotions. David Beem will be awarding a $10 Amazon or BN GC to one randomly drawn commenter via Rafflecopter. Click on the tour banner to see the other stops on the tour.

When the Voice Speaks


“Never argue with a fool, onlookers may not be able to tell the difference.” —Mark Twain

We’ve all been there. I daresay I’ve been there more than most. Still, I thought I had learned my lesson, whether it be arguing politics with fools, friends, or foolish friends. My latest stumbling block is my imaginary friends. For example, the new series I’m writing features a fifteen-year-old child prodigy alpha male protagonist. That guy has no qualms telling someone they’re dumb as a brick, so imagine my surprise when he unleashed himself on an old friend who decided it was the right day to “poke the bear.”

When the voice speaks, it can be exhilarating, or, as in the above example, problematic. It’s as if souls from other worlds have stepped through a magical door, (like in Stephen King’s The Drawing of Three) and “come forward” in your mind to tell your story for you. You’re no longer alone on your journey, and now neither is your reader. An entire language can emerge, literally, as in Lord of the Rings, or, as happens probably more often, through the DNA of a book’s prose.

Readers of my Edger series will not believe my next series is written by the same person. But that’s good! Edger is the literary equivalent of a superhero/spy tv sitcom. I don’t say that to knock it, I think it’s great. But that’s the Grundgestalt of the work, to borrow a term coined by Arnold Schoenberg, who said, “whatever happens in a piece of music is the endless reshaping of the basic shape.” That concept applies to all forms of artistic creation. The hard part for the creator is recognizing your creation for what it is, because ideas rarely form with perfect coherence at the outset. We often struggle to “see” through the murk of imagination. But after you recognize the nature of what you’re striving to reach, your creation will quite literally awaken. It’s as if it becomes a kind of artificial intelligence of itself, repeating its form over and over, until it draws to its logical conclusion. 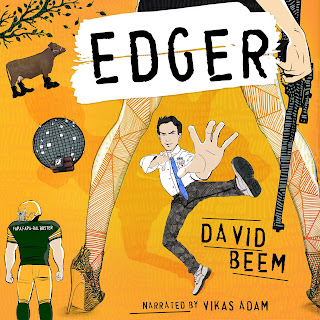 Meet Edger (Ed-jer), a twenty-six-year-old gadget retail dork destined to become the world’s first superhero! His superpower: the ability to channel the Collective Unconscious, a psychic network connecting the living and the dead. In his arsenal are the skills of Bruce Lee, the strength of Samson, the wisdom of the ages...and the dancing chops of Michael Jackson—including that one twisty foot move, crotch grab, and fedora tilt. But there's a catch... Like every psychic super power to get administered through a hypodermic needle, this one comes with a prick. Someone seems to have misplaced the booster necessary for stabilizing his superpower. Without it, Edger has three days before his brain turns to pudding. Join our Dork of Destiny as he overcomes the world’s greatest butt, two rival Cluck-n-Pray gangs, an evil cow, a Green Bay Defensive Tackle, rifle-toting assassins—and a pair of stoners who inadvertently create the world’s first supervillain after a wild night on Twitter!

The water is filling.

Below us, the nightclub turns like a sparkling dream. Worse, Underwearld is wallpapered in phosphorescent art photos of Caleb in his Calvin Kleins.

“Hey Edger—it’s Caleb!” says Mary, banging her shoulder against the side of our disco ball water torture prison and sloshing water. “Caleb! Caleb!”

I roll my eyes. “Of course you know Caleb. Because the universe just couldn’t let me die without letting me know: Hey—Mary knows Caleb.”

“Oh my God, Edger. Not now, okay? High Risk Agency for Regulating the Defense Of the NFL.”

“What!? That doesn’t even make any sense! It should be H-A-R-D-O—wait, somebody capitalized the freaking O—?! You know, my tax dollars paid someone to capitalize that letter O.”

“Really? Really, Edger? You want to do this now?”

“That’s what they always say too: ‘You wanna do this now.’ But notice they never balance the budget. All I’m saying is, you gotta talk about it sometime.”

So I’m panting, she’s panting, and Caleb’s down there scanning the room in front of a larger than life phosphorescent photograph of his crotch. Because apparently all paths in life lead there.

And so there we are, yelling our butts off, banging our shoulders into the wall, water sloshing over our faces—you know, not panicking.

Then the water level reaches our chins.

David Beem loves superhero movies, taekwondo, and flossing. He lives in Djibouti with his family and crippling self-doubt. To help actualize David’s inner confidence, visit his website and buy all the stuff: http://www.davidbeem.com